World Wine Production Could Be The Lowest In Decades 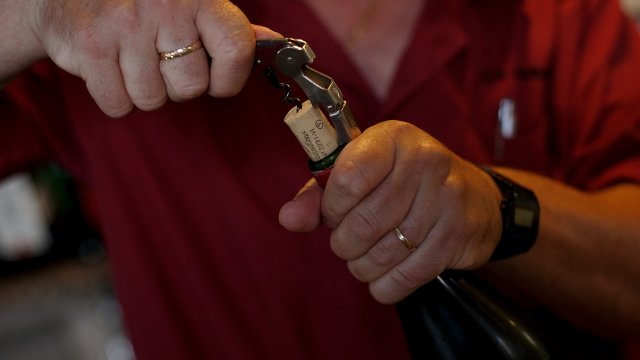 The International Organization of Vine and Wine predicts the amount of wine produced around the world this year will drop more than 8 percent.

Bad news for vino lovers: Global wine production is expected to plunge to its lowest level in decades.

The International Organization of Vine and Wine predicts the amount of wine produced around the world this year will drop more than 8 percent from 2016.

The group says Italy's production will plummet 23 percent, production in France will be 19 percent lower, and Spain will see a 15 percent fall from last year.

This Wine Bar Could Force Trump To Release His Tax Returns

Unfavorable weather conditions in those regions are largely to blame. Parts of Europe experienced droughts and hotter-than-average temperatures during the summer.

And, as Bloomberg notes, that could mean prices for bulk and entry-level wines will go up.

Production in the U.S., on the other hand, is only expected to drop 1 percent this year. But that prediction was made before a series of wildfires scorched parts of California's wine country earlier this month. The Orange County Register says more than two dozen wineries in the region were damaged or destroyed.