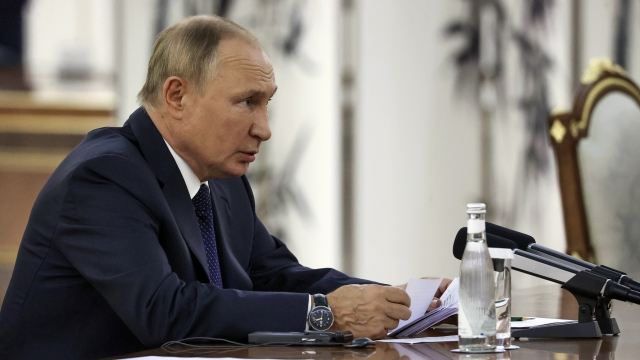 Russian President Putin and Chinese President Xi were due to meet one-on-one to discuss the war in Ukraine, according to one presidential adviser.

Chinese President Xi Jinping, Russia's Vladimir Putin and leaders from India and Central Asia gathered Thursday in Uzbekistan for a summit of a security group formed by Beijing and Moscow as a counterweight to U.S. influence.

The meeting Friday of the eight-nation Shanghai Cooperation Organization is overshadowed by Putin's attack on Ukraine and strains in China's relations with Washington, Europe, Japan and India due to disputes over technology, security and territory.

The event in the ancient sultanate of Samarkand is part of Xi's first foreign trip since the outbreak of the coronavirus pandemic 2 1/2 years ago, underscoring Beijing's desire to assert itself as a regional power.

Putin and Xi were due to meet one-on-one and discuss Ukraine, according to the Russian president's foreign affairs adviser, Yuri Ushakov.

Russia To Hold Sweeping Joint War Games With China, Others

Xi's government, which said it had a “no limits” friendship with Moscow before the invasion, has refused to criticize the attack. Beijing and India are buying more Russian oil and gas, which helps Moscow offset the impact of Western sanctions.

China “states explicitly that it understands the reasons that forced Russia to launch a special military operation,” Ushakov said Thursday, according to the Russian news agency ITAR-Tass.

There was no indication whether Modi might meet Xi. Chinese-Indian relations are strained due to clashes between soldiers from the two sides in a dispute over a border in a remote area of the Himalayas.

Other SCO governments include Kazakhstan, Kyrgyzstan, Pakistan and Tajikistan.

The meeting planned to consider an application by Iran, an observer of the group, to become a full member, according to ITAR-Tass.

President Recep Tayyip Erdogan of Turkey, which has the status of “dialogue partner,” was also in attendance.

Putin and Erdogan planned on Friday to “evaluate the effectiveness” of a deal under which wheat exports from Ukraine via the Black Sea resumed, Kremlin spokesperson Dmitry Peskov said, according to ITAR-Tass.

The Chinese leader is promoting a “Global Security Initiative” announced in April following the formation of the Quad by Washington, Japan, Australia and India in response to Beijing’s more assertive foreign policy. Xi has given few details, but U.S. officials complain it echoes Russian arguments in support of Moscow’s attack on Ukraine.

The region is part of China’s multibillion-dollar Belt and Road Initiative to expand trade by building ports, railways and other infrastructure across an arc of dozens of countries from the South Pacific through Asia to the Middle East, Europe and Africa.

China’s economic inroads into Central Asia have fueled unease in Russia, which sees the region as its sphere of influence.

Xi made a one-day visit Wednesday to Kazakhstan en route to Uzbekistan. Pope Francis was in Kazakhstan, but they didn't meet.