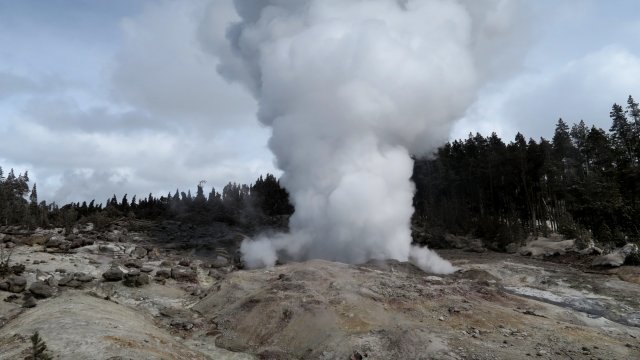 Scientists say there's no reason to worry about a "supervolcano" despite the geyser's recent eruptions.

Since March, the world's tallest active geyser has erupted more times than it did in the 15 years prior — and scientists aren't too sure why.

Here's what we do know: the Steamboat Geyser at Yellowstone National Park can go years without erupting. When it does erupt, it can discharge water nearly 300 feet in the air.

What we don't know, or at least what the U.S. Geological Survey wouldn't say for sure until recently, is why it's erupted eight times this year. The most recent one happened on Monday.

It's been concerning for some because some scientists think Yellowstone is a supervolcano that will some day erupt. This has caused some to fear Steamboat's eruptions may be connected to the suspected supervolcano.

But the USGS says fear not: Geysers are supposed to erupt, and most, like Steamboat, do so erratically. The USGS also says there's no unusual volcanic activity at Yellowstone — at least, not right now.