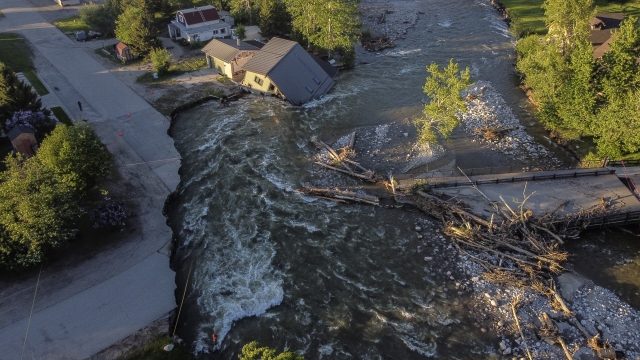 Yellowstone is reopening after historic floods washed out critical infrastructure, but there's still work to be done to get the town and park back.

With its geysers and wildlife, it doesn’t take long to realize Yellowstone National Park is alive.

"People come here, and they walk away with an experience that they never could have gotten anywhere else," said Bob Jacklin, owner of Jacklin’s Fly Shop.

That experience is the heartbeat of the park’s gateway communities.

"The park means everything in this town," Jacklin said. "Once the park closes things dry up; once it opens things open up. So, we all rely on the park."

Now, that reliance is being put to the test. A thousand-year flood event, as the National Park Service called it, wiped out bridges, homes and roads.

Raging flood waters washed out a lifeline-type of road for people on the northern edge of the park, without any firm timeline for repair.

With the northern park entrance closed indefinitely, the town of Gardiner, Montana now looks like a ghost town — a dead end that stops at the iconic Roosevelt Arch, which should be welcoming hundreds of thousands of visitors this year.

"This is the season we make our money, and without that, it's going to be a tough couple of years," said Chris Hoff, owner of Yellowstone Wild Gallery.

"All the years I've lived here, I've always wondered what it would be like in the summer with Yellowstone out of the picture, you know, just who would come what it would look like, we're gonna find out," said Scott Demaree, owner of Gardiner Market.

Shawn Darr and her husband own cabins on the edge of Gardiner. She says they have a handful of reservations but not nearly enough to pay their bills. They geared up for a banner year ahead of the park’s 150th anniversary, and now they're looking at probable loss of most of the entire year's revenue for most people in town.

A newly released national park report shows 4.9 million visitors to the park in 2021 spent more than $630 on average in nearby communities. That equated to more than 8,700 jobs and $834 million in economic benefits.

In the town of West Yellowstone, businesses are grateful for a newly reopened western entrance that brought lines for miles the first day, but they are still concerned about what lies ahead. Newsy spoke to many people in West Yellowstone who all agreed they would go under if the park wasn’t there.

"I feel bad for Gardiner, because I now, you know, they rely on tourists as much as we do, like do or die without people," Ricky Skidmore, West Yellowstone shop manager, said.

Bob Jacklin has seen a lot in his 52 years as a West Yellowstone fishing guide. He says nothing compares to this flooding event, but it does remind him of another time the greater Yellowstone community survived a disaster.

“The fires of '88 bring back, and that that there's one of the big things we lived through," Jacklin said. "That fire got real close to town... and we got lucky they didn't swing north."

Now 34 years later, the gateway towns that rely on the world’s first national park hope for more luck, or at least more visitors, so these communities can keep breathing.

"We just keep getting knocked down and and getting back up," Hoff said.

By July 2, 93% of the park is expected to be open. The north and northeastern entrances will stay closed to vehicles, but foot traffic will be allowed.