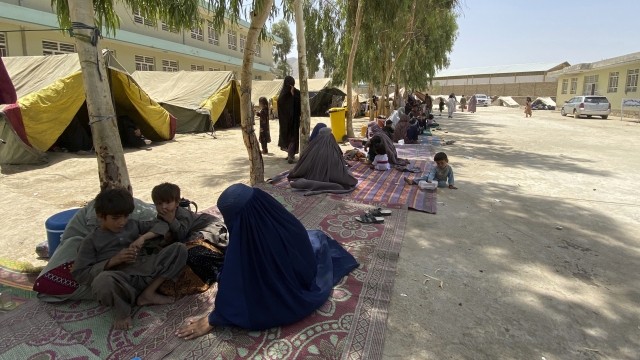 Afghanistan has one of the youngest populations in the world, and experts tell Newsy young people there are facing particular challenges.

"We've all seen the violence and insecurity play out on our TV screens in recent weeks and months. But this really is a longstanding and preexisting crisis that is devastating for the country's children," Orlaith Minogue, a senior conflict and humanitarian advocacy advisor for Save the Children, said.

As a Taliban government settles into power in Afghanistan, aid organizations say an already serious humanitarian crisis is growing worse by the day.

"Decades of conflict combined with climate crisis and the impacts of COVID-19 collectively mean that children and families are in a desperate situation," Minogue said.

"More than half a million people have been displaced this year alone, adding to millions of people already displaced within the country," Minogue said. "What that displacement can mean is that children are sleeping out in the open without shelter, often without even a blanket, hungry and frightened."

Orlaith Minogue works with Save the Children, a nonprofit that provides humanitarian aid to children around the world. They've been working on persistent problems like malnutrition, access to education and child protection in Afghanistan since 1970's.

"We spoke to more than 600 families who were displaced in Kabul earlier this month, and every single family spoke about having to take desperate measures to afford their next meal for some that was selling the meager possessions they had, but for others it was sending children out to work."

Minogue says they've had to temporarily suspend programs in the country until conditions stabilize.

"We have seen in recent weeks that people have been trying to flee the country. In some cases, there isn't a huge amount of information about those numbers. But Save the Children does have programming just across the border in Pakistan, and we're mobilizing for new arrivals there," Minogue said.

As aid organizations scramble to provide assistance in the young country, experts on the region are concerned that the already dire situation will worsen in the months ahead.

"You look at the reality of the worsening drought and the fact that you have several million young people that are experiencing acute malnutrition, these are not things that anyone could fix very quickly," Michael Kugelman said.

Michael Kugelman is the deputy director and senior associate for South Asia at the Wilson Center, a non-partisan policy forum. He says the Taliban will likely struggle to address many of the problems that plague the young country.

"This is a very different Afghanistan than was the case a number of years ago, right? The Taliban may not have changed, but Afghanistan has," Kugelman said.

Young people are also at the forefront of pushing back.

"What we've seen in recent days in major cities like Herat and Kabul is protests largely being led by young people, including women and, in many cases, mostly women," Kugelman said.

But Kugelman says resistance among  young people does not guarantee that these problems or the Taliban will go away anytime soon.

"I think it is important to highlight the fact that even though you have so many young people that would never accept the Taliban, that doesn't mean that can prevent Taliban rule," Kugelman said.