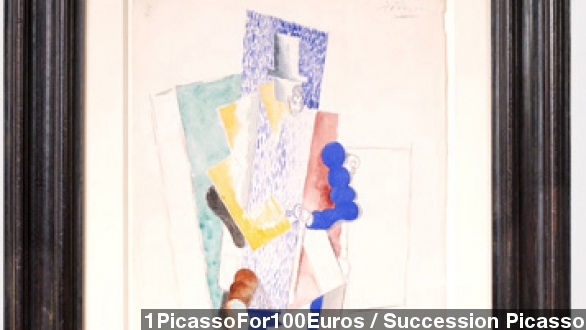 The 25-year-old man who won Picasso's 1914 "Man With Opera Hat" drawing said he simply wanted something for his living room.

Talk about a good investment. A young U.S. art collector bagged himself quite the piece for cheap in a Paris charity auction.

"Won the million-dollar Picasso drawing called 'Man With Opera Hat' — that's what it is. The drawing was offered at an online charity raffle by Sotheby's in Paris. He won it for just $140." (Via WPXI)

An organization trying to save an ancient city in modern-day Lebanon bought Pablo Picasso's 1914 "Man With Opera Hat" and then put it up for raffle. (Via euronews)

The winner, 25-year-old Jeffrey Gonano, figured why not give it a shot? After all, he needed to spruce up the decor at home.

"I saw an article about winning a painting for 100 euros, and at the time, I was actually looking for a piece for my living room, so I just figured I might as well buy a raffle ticket for it." (Via BBC)

And the art world cringes. We're kidding, of course. Gonano almost immediately clarified he won't hang the drawing in his living room. He's not even going to sell it off and make a quick profit, for now.

The raffle even had the blessing of Picasso's grandson. The drawing's value isn't really in its execution, but rather the verified signature in the upper right corner. (Via Bloomberg)

"My grandfather was a pioneer. He was happy to be the first in every kind of situation, so for sure, he was a helpful person. He was very generous giving money around him during many difficult times." (Via Sky News)

As the raffle grew near, organizers said they sold most of the 50,000 raffle tickets they planned to issue, which would've brought in $7 million.

Sorry, everyone. Looks like you'll have to wait for the next cheap chance at a Picasso — if that ever happens again. (Via 1Picassofor100euros)