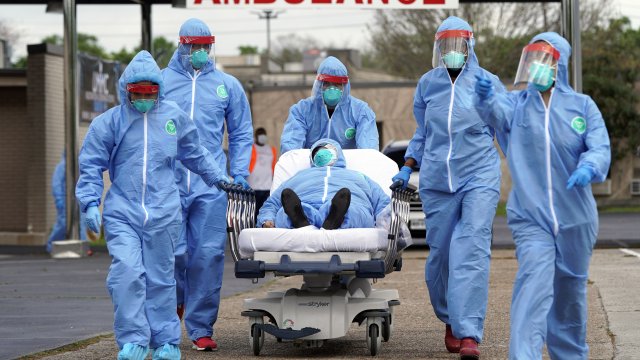 New CDC data shows younger people are more susceptible to getting seriously ill from the coronavirus than previously thought.

Younger people are more susceptible to getting seriously ill from the coronavirus than previously thought, according to the Centers for Disease Control and Prevention.

While the likelihood of dying or of being hospitalized from the coronavirus is significantly higher in older adults, new data from the nation's top health agency found that of 508 patients hospitalized, nearly 40% were between the ages of 20 and 54.

However, at this time, coronavirus is still believed to pose a greater risk for older people — 80% of deaths linked with the virus occurred among adults aged 60 and over.

The CDC also analyzed cases of 121 patients known to have been admitted to an ICU. Nearly half were adults under 65. ICU admissions were highest among adults between the ages of 75-84. There were no ICU admissions reported for those under age 19.

Though the report didn't say whether the patients had underlying health conditions that could have made them more vulnerable to the virus, public health experts say young people should be just as wary as older generations.

"It's not totally clear what additional risk factors there are in addition to just age, so we're still betting that and trying to figure that out. I think with the younger patient population, it's tempting to say that all of those folks who are younger who are critically ill must have something wrong, must have some underlying condition, but that's not always the case. And just like young people get heart attacks, not just, you know, 50-60-somethings, people can get really ill with infectious diseases as well," said Dr. Amer Aldeen, chief medical officer of U.S. Acute Care Solutions.

The White House has urged young people to take social distancing and isolation seriously to slow the spread of the virus.

"There are concerning reports coming out of France and Italy about some young people getting seriously ill and very seriously ill in the ICUs. ... And so even if it's a rare occurrence, it may be seen more frequently in that group and be evident now," said Dr. Deborah Birx, White House coronavirus response coordinator.