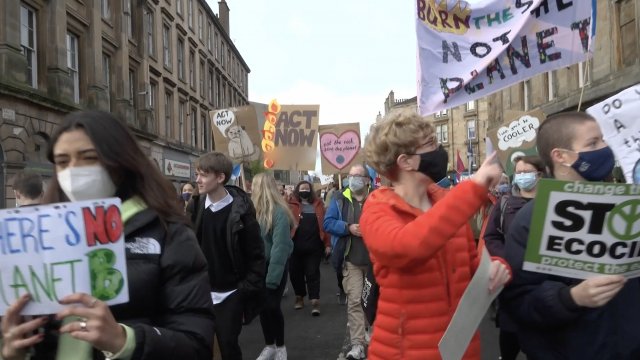 One Young World, a community of more than 12,000 young leaders, has rented a space on the River Clyde. It gives people, like Nasha Ayelén Cuello from Argentina, a forum to share her views and hear others from around the globe.

As a UNESCO global youth delegate for the Paris agreement in 2015, Cuello knows all too well about the message young people can send and the influence they can wield.

"I believe that this new generation of people are really going to drive the transition, right?" Cuello said. "We have seen more young people than ever at COP. My first COP was COP21. After that, I also had the opportunity to be a One Young World ambassador at the Hague Summit where I see the power of youth, and right now I see it here again. And actually, I believe that the young people are those who inspire us to change. Who inspires you the most? Like the big leaders coming in Glasgow and saying again and again the same speeches, or the young people that walk in the streets and actually teaching their parents and doing a lot for climate."

Those are sentiments being echoed by even the highest profile activists.

Thunberg inspired a protest by Fridays for Future, a movement that began when then-15-year-old went on strike from school to object against the lack of action on the climate crisis.

About 10,000 people have joined the march through Glasgow. They say the promises made at COP26 just aren't enough.

But one member of the U.K. Youth Climate Coalition says young people can make a difference at this summit alongside world leaders.

Serena Bashal has been at every COP since she was 18, calling in particular for climate justice. She says there have been some changes within the walls of the conference that point toward progress.

"For the last COP, COP 25, there wasn't really that much collaboration with organizing the key youth events within the COP25 program," Bashal said. "But then this year, the mic has kind of been passed on to us as the young people to actually organize these events and take a lead and actually having a say in how these are organized, so that's really nice to see."

There is hope that these calls for action will be heeded and acted upon, yet time is running out. If future generations are to be protected, their demands will need to be heard sooner rather than later.