Your Halloween Candy Will Cost More This Year Thanks To Inflation 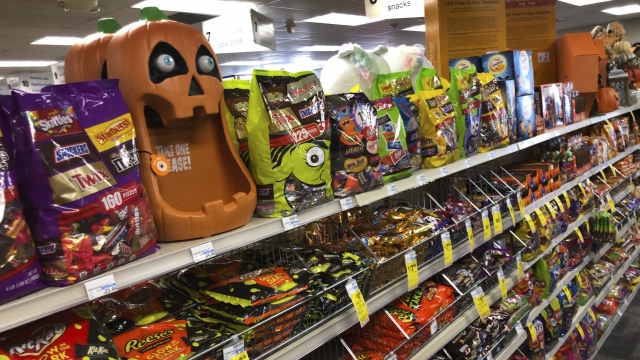 The scariest part of Halloween this year might be the cost of candy. Prices have experienced their highest jump on record this year.

The scariest part of Halloween this year might be the cost of participating. Candy prices are soaring. In fact, candy costs have experienced their highest jump on record this year, leaving many of us saying "boo" in a less-than-festive manner.

The Bureau of Labor Statistics' recent Consumer Price Index reports that the cost of candy has escalated by 13.1% since last year, which is the biggest-ever year-to-year increase. NPR reported that this percentage hike took approximately nine years to accomplish previously, when candy prices increased 13% from 1997 to 2006.

The markup is being caused by the increasing cost of sugar, flour and cocoa — critical candy ingredients currently affected by a mixed bag of supply chain issues, extreme weather and disruption from the war in Ukraine. Sugar and sugar substitutes are up 17%, while flour prices have risen more than 24%. Dairy shortages have also hindered production.

In July, Hershey's CEO Michele Buck announced the company would not be able to fully meet consumer demand for Halloween candy.

New economic data from the Labor Department will likely lead to another interest rate hike by the Federal Reserve in November.

The company saw a double-digit sales increase for its most recent quarter compared to the previous year. Demand for consuming more chocolate and candies is on the rise, and who can blame people for reaching for sweets after a seemingly never-ending pandemic?

Brach's Candy Corn at Walmart is priced 4.7% higher than last year, according to Klover, a consumer data financial platform. Walmart is also selling a 160-piece "fun-sized" variety pack of M&M's, Starburst, Skittles, Snickers and Twix for $16.98, which is $2.24 more than what it sold for a year ago.

The rate of price increases has been steadily climbing, nearly doubling since June. Last month alone, prices increased by 2%, according to the Consumer Price Index.

Shrinkflation is also hitting the Halloween candy market. Package sizes are shrinking, along with the candy bars inside of them. Forbes reports that the serving size of a Snickers Mini bar is approximately half the size of the size listed for the product on the official M&M Mars website. Companies are looking to provide less product at the same price point so they won't lose money — and hoping less savvy shoppers won't notice the change.

One way to help offset the cost is to consider purchasing a product with more than 200 pieces per bag. As a general rule, these larger bags are often cheaper on a per-piece basis when compared to smaller smaller-count bags.

While those "good" trick-or-treating houses that hand out full-sized candy bars just got even rarer, the majority of Americans (69%, Statista says) still plan to celebrate Halloween in some way, and that includes buying candy.

A survey from the National Retail Federation, an industry trade group, reports that the average household plans to spend nearly $30 on Halloween candy. However,  because of rising prices, the total might come closer to $35 per household in 2022. Collectively, Americans are anticipated to spend $3.1 billion on candy this season.

Why Is Pumpkin Spice Season So Popular?

Fall is here and the pumpkin pie spice trend is once again taking over. But why is this season so popular?

To add to this year's frightening aspects, pumpkin prices and costume costs have also jumped. Still, although this year's festivities might make more of a dent in our wallets, it likely won't be enough to make us sit it out.

The upside to it all: We can still celebrate. Thankfully, there's still the good old standby inexpensive costume — like sheet ghosts — that can help balance out the budget.

And with costs getting higher, it's possible that candy might taste just a bit sweeter this year.