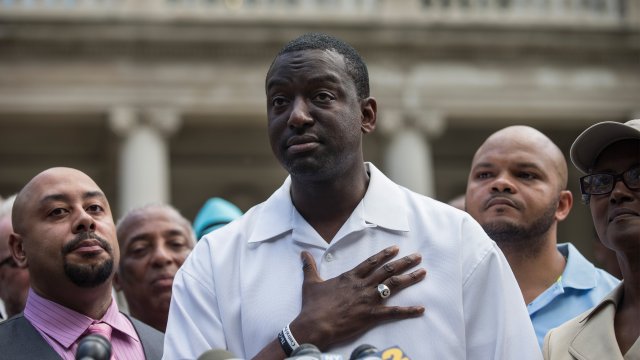 In 1989, the Central Park Five boys confessed to a crime they didn't commit. Today, 36% of juvenile wrongful convictions involve a false confession.

Newsy's Jamal Andress asked, "One of the reasons that I think the film is so powerful is because they spend most of that first episode on the interrogation. I'm wondering if you could tell me how accurate that is?"

Innocence Project Board Member Yusef Salaam responded, "Oh, 100%. One of the things that I think that the public needed to know, really the world needs to know, is what the criminal justice system is like in America."

Yusef Salaam is one of the now-exonerated Central Park Five whose story is depicted in the Netflix film "When They See Us." The film is a damning indictment of common interrogation techniques that lead to false confessions, and has spurred activism among criminal justice advocates.

Salaam served six years and eight months after being wrongly convicted of rape and assault as a juvenile in one of the country's most infamous false conviction cases.

After a 28-year-old female jogger was raped in New York City's Central Park in 1989 — Salaam, along with Kevin Richardson, Antron McCray, Raymond Santana and Korey Wise were picked up in a broad police sweep. All were under the age of 17.

SALAAM: "We look back as adults at 16 year olds, these are children. We're talking about 14, 15 and 16 year old children. This should have never happened to us."

The boys were interrogated by police for hours without lawyers present. Aside from Salaam, all the other members of the Central Park Five gave video-taped, coerced confessions while in police custody.

SALAAM: "This is not just one hour or two hours. We're talking about, some of us had been interrogated from 24 to up to 36 hours — nothing to eat, nothing to drink. Many times if we fell asleep, they woke us right up. So you begin to live in this state of deliriousness and you just want it to stop."

Salaam and the rest of the Central Park Five wouldn't be exonerated until 2002, 13 years after their arrests. Despite no DNA evidence and several inconsistencies in their stories, their false confessions were enough to get five guilty verdicts.

"Confession is the queen of proofs. You know, it's that powerful," Steven Drizin, Co-Director of the Center on Wrongful Convictions.

As Co-Director of Northwestern's Center on Wrongful Convictions, Steve Drizin is especially interested in the role that coerced confessions play.

You may recognize Drizin from another case centered around a controversial confession: Brendan Dassey, whose murder conviction was chronicled in the popular Netflix documentary "Making a Murderer." Drizin is currently seeking clemency for Dassey.

Like Salaam, Drizin says the interrogation shown in "When They See Us" is realistic. The tactics portrayed in the film — threats, pitting suspects against each other, and promises to go home after hours of police questioning — are all techniques officers have used to coerce confessions.

DRIZIN: "What happens during an interrogation is that police officers manipulate a suspect to a place of hopelessness, where their assertions of innocence are rejected. Denial is futile. And when they get that suspect to that place, they offer them a life raft … They say something like, who would you rather be the person who is looking at this while it's happening or the person who is holding her down and beating her or who pulled the trigger or, or some more serious type of conduct. And over time, a suspect will take the lesser of two evils."

The National Registry of Exonerations shows that 19 of the 151 exonerations in 2018 involved a coerced confession. 36% of juveniles listed in the registry falsely confessed, more than three times the rate of adults.

DRIZIN: "Everyone has a breaking point. It's hard to believe but I can tell you right now, I'm convinced that you or I could be made to confess under the right circumstances, it's just that some people have a much lower threshold before they reach that place. And juveniles are particularly vulnerable."

Despite the alarming number of false confessions, there's not many laws regulating police interrogations.

DRIZIN: "Really the only bright line rule is don't beat up the suspect don't physically abuse or torture, the suspect. There's a lot of gray in these areas. And police exploit that gray because they know that many judges are not going to throw out these confessions, it's worth the risk to push the envelope."

Lawyers like Drizin and exonerees like Salaam -- who have seen this up close -- are calling for reforms in this area of the criminal justice system: Demanding that all police interrogations be recorded from start to finish, and providing lawyers for juveniles, whether they request one or not.

SALAAM: "Everybody could have done better. … But I think in some way, in the mysteriousness of it all we were being chosen for this. Nobody is given more than they can bear. So here we are, we were being shaped and molded and stretched in what we now know as the belly of the beast, to be birthed into a world where now 30 years later, we're ready to deal with the system."