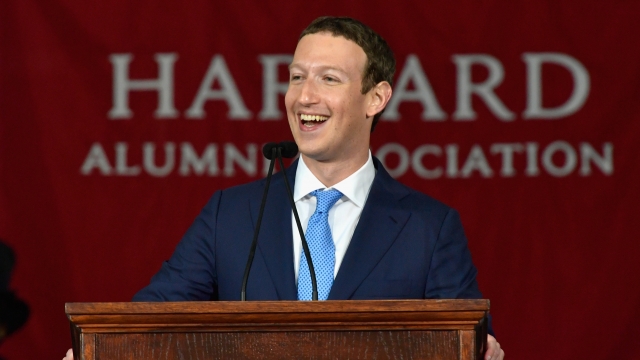 The Facebook founder and CEO dropped out of Harvard in 2004 after creating the social networking site in his dorm room.

"If I get through this speech, it'll be the first time I actually finish something here at Harvard," Zuckerberg said during his Harvard University commencement address.

The tech guru urged graduates to build a world that gives everyone "a sense of purpose."

"Purpose is that feeling that you are part of something bigger than yourselves, that you are needed, that you have something better ahead to work for," Zuckerberg said in his speech, which he streamed live on Facebook.

Zuckerberg talked about pursuing "big meaningful" projects, citing the space program and Hoover Dam as examples from past generations.

He raised possibilities about "stopping climate change," "curing all diseases"  and "modernizing democracy so everyone can vote online."

But Zuckerberg also acknowledged hurdles the graduates will need to overcome — like automation of jobs and wealth inequality.

"There is something wrong with our system when I can leave here and make billions of dollars in 10 years while millions of students can't even afford to pay off their loans, let alone start a business," Zuckerberg said.

Mark Zuckerberg Does Not Want To Be Your Next Politician

He is busy touring the country, though.

It's why Zuckerberg and his wife, Priscilla Chan, pledged in 2015 to give away 99 percent of their Facebook shares during their lifetime. At the time, those shares were worth $45 billion.

Now, Zuckerberg never got his college degree. He dropped out of Harvard when he was a sophomore after creating Facebook in his dorm room.

But the university did give him an honorary doctoral degree Thursday — something we're sure made Zuckerberg's parents pretty dang proud.