100 Nations Have Banned Cluster Bombs. So Why Won't The US? 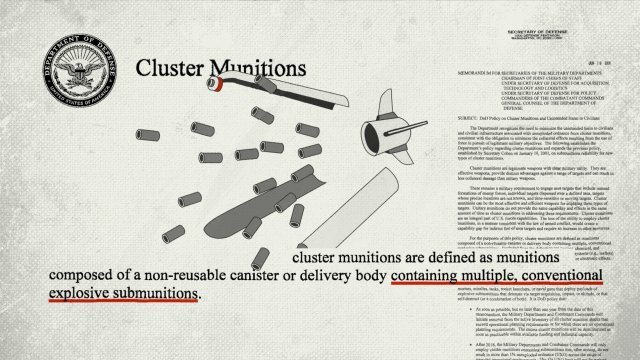 The U.S. has indefinitely delayed a ban on using outdated or unreliable cluster bombs — so what does that mean for the movement to ban them?

Cluster bombs are widely condemned because they're indiscriminate weapons and not meant to be precise.

More than 100 nations ban the bombs. Although the U.S. isn't one of them, it did commit to phasing out unreliable cluster bombs by 2018. But now, even that phase out is being delayed. So why is the U.S. still clinging to cluster bombs?

Mark Hiznay, a senior arms researcher and the associate director of the arms division at Human Rights Watch, said, "What in effect has happened is the U.S. failed to design a safer cluster munition and is now going back to using the unsafe cluster munitions.

"People should care that the laws of war are not being evenly applied by states and the United States is now among the groups that use this weapon, which has a nasty and well-deserved reputation for being indiscriminate, both at the time of the attack and after the attack."

The ones that don't go off pose a huge threat to civilians long after the bomb is used. Children might pick them up and set them off, or a farmer might detonate one in a field.

When Nations Go Nuclear, They Gain More Than Just The Bomb

Nations acquire nuclear weapons for all sorts of reasons, and it's rarely about actually setting off the bomb.

"The one system that the U.S. had that it would meet the 1 percent dud rate policy is called sensor-fuzed weapon, and the military term is called CBU-105," Hiznay said. "Every step, there was a failure. Either they didn't separate from the bomb, they didn't self-destruct. But here you are with something very odd-looking sitting in the middle of the road in Yemen, just begging for you to pick it up."

The U.S. has a long history with cluster bombs; it first used them in World War II after capturing German "butterfly bombs."

In the 1960s and '70s, the U.S. blanketed southeast Asia with them. Leftover bomblets that didn't explode quickly became a nightmare for people in places like Southeast Asia or Afghanistan.

Eventually, the U.S. Department of Defense committed to stop using cluster bombs that had a dud rate of more than 1 percent. It set 2018 as the deadline. But in November, the Pentagon delayed that commitment indefinitely.

This doesn't mean the U.S. will start using cluster munitions any more than it already is — the last time it did was in a cruise missile attack in Yemen in 2009. But it is a blow to the effort to get rid of cluster bomb submunitions.

"To get a hold of the problem, you need to stop the use in the first place, to be able to start catching up with the problems," Hiznay said. "They're still digging up many thousands of unexploded submunitions in Vietnam, Cambodia and Laos every year to this day."