When Nations Go Nuclear, They Gain More Than Just The Bomb 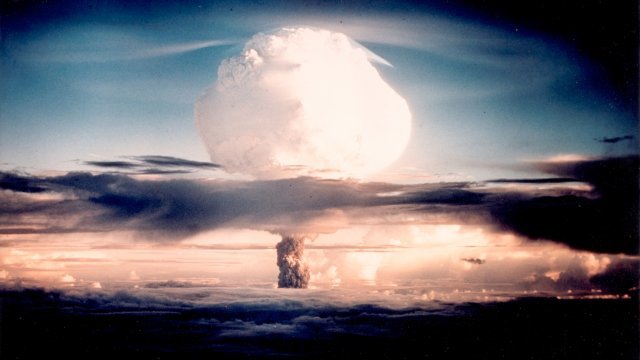 Nations acquire nuclear weapons for all sorts of reasons, and it's rarely about actually setting off the bomb.

Nuclear weapons have been around for more than 70 years. In that time, nine countries have acquired them. North Korea is the latest, and it wants more. Other countries aren't shy about potentially acquiring their own. But these nations go nuclear for a lot of different reasons — and it rarely has to do with actually using a nuclear weapon.

The most obvious reason nations build nuclear weapons is deterrence. If two nations can strike each other with a nuclear weapon and kill millions, then the chance one attacks the other decreases significantly.

But going nuclear empowers governments in lots of other ways. For North Korea, it's largely about internal stability — protecting against regime change. It fears the U.S. will try to topple its government, so it hopes nuclear weapons can prevent any action.

"I think the intel community assesses — and I agree — that Kim Jong-un is on the path he's on right now because he believes that's necessary to enhance the survival of his regime. So he views the possession of ballistic missiles and nuclear capability is inextricably linked to regime survival," Gen. Joseph Dunford said at a U.S. Senate Armed Services Committee hearing.

This is different than a nuclear power like the United Kingdom. When Britain built the bomb, World War II was fresh in everyone's memory and Western Europe was on edge over fears the Soviet Union would attempt to expand further into Europe. Britain didn't want to rely wholly on the U.S. for protection, so the nation built the bomb as a means of self-defense.

France, on the other hand, decided to build the bomb a few years later in a quest to reassert its power status. It had already created a peaceful nuclear program in the years after World War II, and the nation's forced withdrawal during the Suez Canal crisis helped set the nationalistic tone needed to back weaponization.

One author connects France's decision to go nuclear with something he calls "national identity conception" — essentially, how a nation views its place in the world. President Charles de Gaulle believed France could only be France if it were a great power. And to be a great power, it needed great weapons.

After China's successful tests in the mid-'60s, India started building its own nuclear weapons program to rival its Asian neighbor. It detonated its first bomb in 1974, and, a little over two decades later, India's other rival, Pakistan, built its own bomb.

Of course, it's not always about rivaling other nuclear powers. Israel, which is assumed to either have nuclear weapons on hand or the ability to quickly put them together, would have the upper hand if any of its neighbors tried to overpower the small nation by conventional means. This same factor may play a role in East Asian nations seeking nuclear capabilities in response to China's growing conventional strength.

President Donald Trump's allusions to pulling U.S. military support out of of East Asia has also sparked some debate in South Korea and Japan about whether the two nations should pursue the bomb to deter a potential strike from North Korea.

But there's a reason only nine nations have nuclear weapons: They're a big responsibility. And no nation wants to let one slip into the hands of a non-state actor that doesn't play by the same rules.