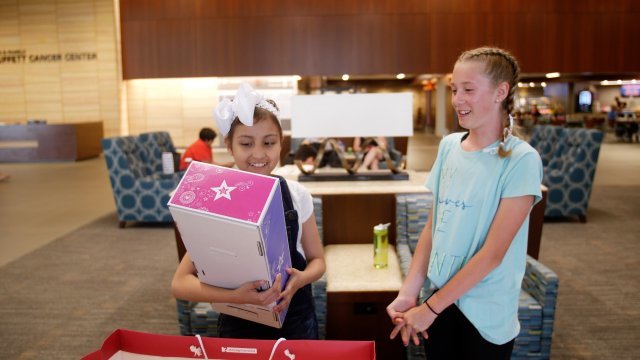 Karrisa Mickelson of Iowa saved her allowance and raised money to get Daisy Anguiano Miranda, who is fighting cancer, an American Girl doll.

Daisy Anguiano Miranda has fought a rare bone cancer called Ewing's sarcoma twice since she was 8. The now-11-year-old Nebraskan has managed to stay optimistic while undergoing radiation, chemotherapy and even surgery.

In fact, Daisy's optimism was so inspiring that an 11-year-old stranger was motivated to get her a special gift.

That stranger is Karrisa Mickelson of Iowa. Karrisa had seen a video about Daisy, and her elementary school class made paper flowers for Daisy's birthday. But Karrisa felt compelled to do more. Her mom tells Newsy she wanted to get Daisy a popular American Girl doll in Daisy's likeness.

These Cartoon Characters Are Helping Kids Cope With Cancer

Cancer can be scary, especially for kids. These animated characters help kids deal with the emotional and medical strain of their journey.

"I thought if I had cancer, I would want something like this, too," Karrisa said.

Most American Girl dolls cost $115, so Karrisa saved up her allowance and hit up her relatives for some fundraising. Her family traveled to an American Girl store in Minnesota to pick out a doll that looked like Daisy, and they chose several doll accessories. Karrisa also made custom dresses and bows for her new friend's present. Daisy warmly received the gift last week. The two girls met at the hospital where Daisy has been receiving cancer treatments.

"It does look like me. I can braid its hair, its long hair, instead of braiding my short hair. When I go to college I'm going to have this doll be my sidekick!" Daisy said.

Across the country, another 11-year-old girl is thinking about the future, too. Last week, cancer survivor Sadie Keller stood by President Donald Trump as he signed the STAR Act, providing millions of dollars to childhood cancer research. You could say it's been a big week for 11-year-old girls. Even bigger for all kids fighting cancer.