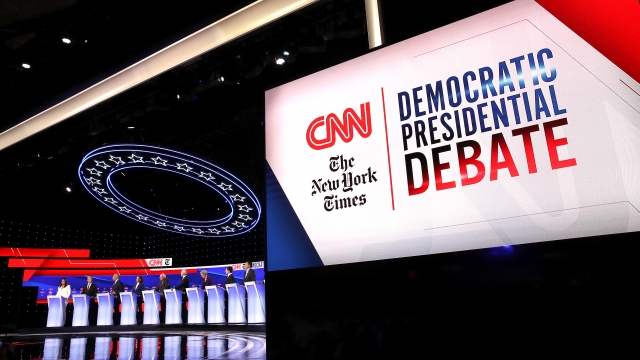 The decision to put 12 candidates on stage made it the largest primary debate in U.S. history.

For the first time ever, 12 Democratic presidential candidates took the stage at one time Tuesday night for the fourth debate. And that led to a three-hour debate that was sometimes hard to control.

"It is wrong to move on," Sen. Cory Booker said.

"I'd like to ask our other candidates this question. I'd like to start with Sen. Warren..." Rep. Tulsi Gabbard said.

The Democratic National Committee decided not to split the candidates into two groups so all the frontrunners could be on stage together. All 10 candidates who took part in the September debate were together again, with the additions of Rep. Tulsi Gabbard and billionaire Tom Steyer.

Two major issues have cropped up since the September debate — the House opened a formal impeachment inquiry, and President Trump pulled U.S. troops from the northeast border in Syria. And the moderators started their questions with impeachment.

"This has got to be about patriotism, not partisanship," Booker said.

"I don't really think this impeachment process is gonna take very long because as a former prosecutor I know a confession when I see it," Sen. Kamala Harris said.

On Syria, former Vice President Joe Biden and Mayor Pete Buttigieg both spoke passionately about their disapproval of the Trump administration's decision.

"Work my way toward what in fact needs to be done, protecting those Kurds. They lost their lives. This is shameful, shameful what this man has done!" Biden said.

Sen. Elizabeth Warren spent much of the night on defense. On the issue of health care, her fellow candidates attacked her for not being transparent about how she'd pay for her Medicare for All plan.

"No plan has been laid out to explain how a multi-trillion dollar hole in this Medicare-for-all plan that Sen. Warren is putting forward is supposed to be filled in," Buttigieg said.

"At least Bernie is being honest here and saying how he is going to pay for this and that taxes are gonna go up. And I'm sorry Elizabeth, but you have not said that. And I think we owe it to the American people to tell them where we're gonna send the invoice," Sen. Amy Klobuchar said.

This debate came almost two weeks after Sen. Bernie Sanders had a heart attack. The three frontrunners are also the three oldest candidates in the race, and each one was asked to tell voters why their age shouldn't be a concern.

"And we are going to be mounting a vigorous campaign all over this country. That is how I think I can reassure the American people," Sanders said.

"One of the reasons I am running is because of my age and my experience, with it comes wisdom," Biden said.

"I will outwork, out-organize, and outlast anyone, and that includes Donald Trump, Mike Pence, or whoever the republicans get stuck with," Warren said.

The DNC upped the donor threshold and poll minimums for the November debate, and so far, only eight candidates have qualified.