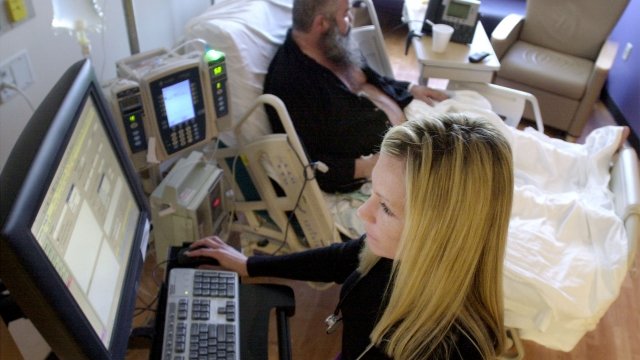 Ransomware, malware or denial of service attacks were linked to most breaches. Researchers say the incidents may cost the industry billions.

Nearly 90 percent of health care organizations in a new study have dealt with a data breach in the past two years. About half of those saw at least five attacks in the same period.

That study suggests these breaches are becoming more common and more expensive. Researchers estimate hacks could cost the health care industry up to $6.2 billion.

When hackers attack a hospital, they're usually either looking for patients' billing, insurance and payment details, or they're holding the hospital's data for a ransom.

And those criminal attacks, like the ransomware hack of England's National Health Service, were the most common cause of the breaches.

Despite increases in spending on technology and security budgets, about half of health care organizations in the study say they "have little or no confidence that they can detect all patient data loss or theft."

Researchers said even with the large number of hacks in the study, a majority were small and concerned fewer than 500 records per breach.