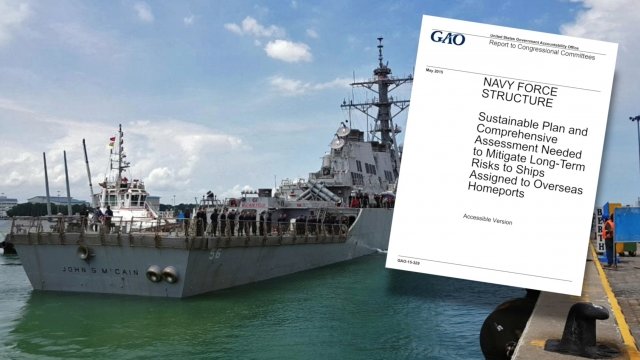 A 2-year-old report outlined problems in the U.S. Navy that some lawmakers say contributed to recent accidents.

In a 2015 report to Congress, the Government Accountability Office, or GAO, warned of potential "long-term risks" to naval ships and personnel. The report argued "the high pace of operations ... limits dedicated training and maintenance periods."

So far in 2017, four U.S. warships have been involved in separate accidents; two of those incidents left at least nine sailors dead.

The Trump administration has issued official guidelines on how to implement its new ban on transgender military service members.

After the latest accident, the chief of naval operations ordered an operational pause for all fleets. A new commander was appointed to the U.S. 7th Fleet. That group is based in Japan and operates in more than 47 million square miles in the Pacific and Indian oceans, where the four incidents occurred.

The GAO report compared the 7th Fleet to ships based in the U.S.

This problem isn't helped by the overall shrinking of the Navy; CNN reports that while about 100 ships are deployed at any given time, the overall size of the Navy sits at 276 ships as of last year. That's down from more than 450 ships in 1993.

Rep. Adam Kinzinger said the Navy is "probably approaching a readiness crisis." Rep. Ruben Gallego said: "We need to have a military that is fed, trained and ready to go, and we're not doing that right now."

The House Armed Services Committee has scheduled a hearing on the Navy's preparedness. The author of the GAO report, along with the Navy's surface forces commander, will testify Sept. 7.