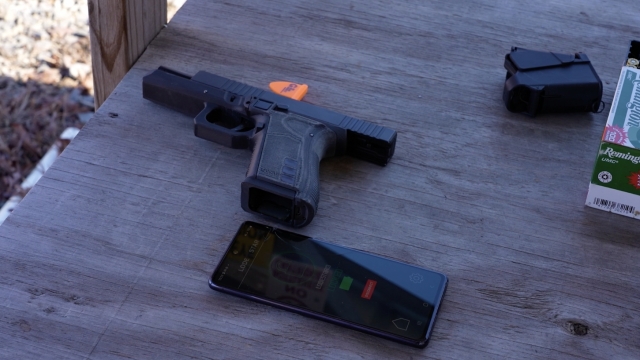 There’s still a lot more that needs to be looked at and perfected before introducing smart guns to the world.

A firearm that can only be shot by the authorized user in an effort to prevent accidental shootings.

That’s the goal, says Ginger Chandler, the co-founder of LodeStar Works, a company working to develop a “smart gun” that can be locked and unlocked three different ways: by fingerprint, a pin-pad, and an app.

The technology could help prevent gun-related deaths by unauthorized users.

Chandler gave Scripps News a walk-through on how it all works.

“It's just pressing a button to unlock and lock. Um, except when your fingers are cold. So, this would be when you would have to use something else. Right? There it goes,” said Chandler. “This is why people, though, doubt the technology. That exact thing that can't. When we go into production, that can't happen.”

Scripps News’ Stephanie Sandoval: You talk a little bit about people's concerns about not being able to unlock it. But like you said, there are technically three different ways to unlock it.

Sandoval: So why do you think that's still a concern for people?

Chandler: I've just got to prove all three ways work. I got to prove they're reliable. And I got to prove that under duress, could I even do the pin pad on the side, right? Probably not. And so, the consumer who's going to buy this is the consumer that has a different concern. Maybe they're worried about small children in the house. So, they're going 'I'm willing to risk having to use one or two different ways to unlock this as long as my children can't unlock it.'

Scripps News spoke to gun owners about whether they would consider buying one if it became available on the market.

“I have a niece and nephew and my husband is an armed guard, so if they're over, like, knowing that our guns are safe, locked up, if they were to pick one up, knowing that it's locked from an app, would be... I like that. I love that idea, actually,” said gun owner Haley Hardin.

Others question whether the technology would actually work in a time of defense.

“My initial impression was it seems cool and like it would be something helpful for safety, but it seems like if you're in the moment, it's something that's another thing that you're really asking to fail because you're just adding electronics to a mechanical thing,” said gun owner Wyatt Tharpe.

The National Shooting Sports Foundation says they’re not opposed to the development of authorized user technology, but it does raise other red flags.

“Where we have concerns about is if that becomes mandated technology, if that's something that states start to require, that is on a firearm. And it presents several problems. First, for the manufacturers, it presents an issue of responsibility if that if that technology doesn't work as advertised,” said NSSF Public Affairs Director Mark Oliva.

Chandler says they’re not giving up.

“I will do all the testing that will make us comfortable that this firearm is going to work at a reliability level of our current firearms. Everybody thinks current firearms have no issues, but they do,” said Chandler.

“We know after we launch this into the world, somebody is going to go on YouTube and tell you how to hack it and get around it. I just want that to take more than 10 minutes. If they have to wait 10 minutes, 10 minutes is a long time. And if they can't figure it out, I think that it would pause. And we may prevent a suicide. We may prevent a child getting into a backpack when the mom's turned.”

Chandler says they really want to make sure everything is fully functional and reliable before taking this to market.