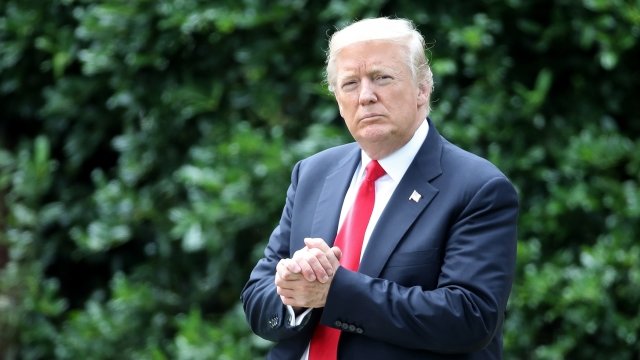 A congressman filed articles of impeachment against President Trump, accusing him of incompetence and obstruction of justice.

For the first time, a member of Congress has filed articles of impeachment against President Donald Trump.

The White House dismissed the bill as "utterly and completely ridiculous and a political game at its worst."

The word "impeachment" has resurfaced again and again as the Trump White House has struggled with scandals. But don't expect this motion to come to anything — at least, not yet.

Republicans control both chambers of Congress, and there's virtually no chance House Speaker Paul Ryan will even bring it up for a vote.

Even Democrats reportedly asked Sherman to slow down when he talked about impeachment in the past. House Minority Leader Nancy Pelosi said she wanted the Russia investigation to play out before trying to oust Trump.

Sherman's measure to impeach Trump only had one supporter: Democratic Rep. Al Green.

It seems that even Sherman knows this isn't going to work. But he said the bill could serve as a wake-up call to the Trump administration.

He wrote: "If they actually see Articles, perhaps we will see incompetency replaced by care. Perhaps uncontrollable impulses will be controlled. And perhaps the danger our nation faces will be ameliorated."