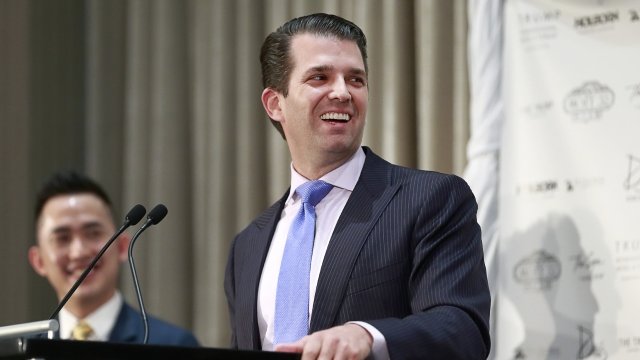 Donald Trump Jr. himself revealed an attempt to draw information from the Russian government that might damage Hillary Clinton during the U.S. presidential campaign.

Trump Jr., along with campaign aides Jared Kushner and Paul Manafort, met with lawyer Natalia Veselnitskaya, who had ties to the Kremlin.

But when the meeting happened last June, that lawyer said she didn't have any dirt on Clinton. Trump Jr. says she wanted to talk about adoption and Russian sanctions.

He released the emails after The New York Times reported the Kremlin wanted to help out the Trump campaign by providing information on Clinton.

So, who is she? And why did she reach out to the Trump campaign? Consider it a form of lobbying.

"Natalia Veselnitskaya wasn't just defending her client," said Bill Browder, the man behind the U.S. Magnitsky Act, which placed sanctions on Russia. "She was defending the Russian federation."

It goes back to a law called the Magnitsky Act that Bill Browder helped pass in 2012. It was named after Russian lawyer Sergei Magnitsky, who exposed a $230 million tax scam involving Russian officials. He was later found beaten to death in a Russian jail. The Magnitsky Act punishes Russian officials accused of committing human rights abuses, freezing their assets and blocking their visas.

This law infuriated Russian President Vladimir Putin. For years, it's been a top priority for him to get those sanctions lifted.

"This is purely political," Putin said in a news conference. "An unfriendly act. We certainly need to give an adequate response. The Foreign Ministry announced right away that Russia will react."

Browder pushed for the Magnitsky Act. Magnitsky was his lawyer. And since Magnitsky's death, Browder has been on a campaign to bring those responsible to justice.

"She went so far as to organize a one-woman campaign to repeal the Magnitsky Act, which was put in place in the United States to impose sanctions on Russian human rights violators," Browder said.

Browder says he thinks she should have been registered under the Foreign Agents Registration Act.

"So far, there has not been an investigation," Browder said. "This raises a very important question about this case and others is if there is no enforcement of the Foreign Agents Registration Act, then there will be lots of foreigners playing dirty games in Washington, and I suspect there probably have been."

Two top Trump advisers eventually did register as foreign agents, including Paul Manafort, who was at that meeting between Trump Jr. and the Kremlin-tied lawyer.