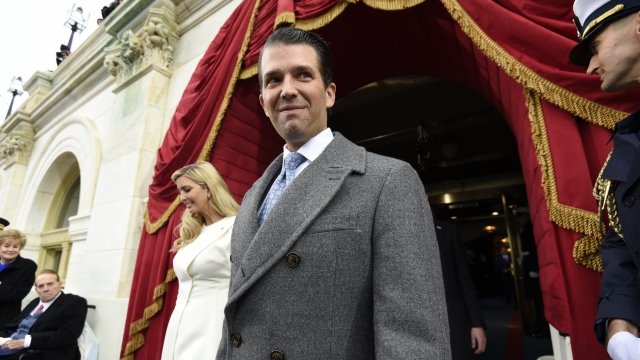 He released the emails after The New York Times reported the Kremlin wanted to help out the Trump campaign by providing information on Clinton.

Donald Trump Jr. released the email thread regarding his controversial June 2016 meeting with a Russian lawyer.

Let's back up. Over the weekend, President Donald Trump's eldest son confirmed to The New York Times he went into that meeting after being promised information that could potentially hurt Hillary Clinton in the election. On Tuesday, the Times reported the Russian government was the source of the info.

The meeting was set up by a man named Rob Goldstone. In an email dated June 3, 2016, Goldstone told Trump Jr., "The Crown prosecutor of Russia ... offered to provide the Trump campaign with some official documents and information that would incriminate Hillary and her dealings with Russia." Goldstone described the material as "very high level and sensitive" and explicitly stated it would be "part of Russia and its government's support for Mr. Trump."

In the younger Trump's response, he said, "if it's what you say I love it."

After some back and forth, an email a few days later from Goldstone initiated a meeting between Trump Jr. and an individual described as "the Russian government attorney."

The lawyer was never named in any of the emails released by Trump Jr. And if there was any correspondence directly between the two of them, it has not been released.

Sen. Mark Warner, the top Democrat on the Senate's intelligence committee, said the panel "intends to ask" Trump Jr. why he took the meeting.

The attorney told NBC she never had any information on Clinton and the point of the meeting was to discuss an adoption program. She also denied being involved with the Kremlin.

In a statement Tuesday, Trump Jr. said he was releasing the email thread on Twitter "in order to be totally transparent."