Conflicting Stories On If Kremlin Was Involved In Trump Jr.'s Meeting 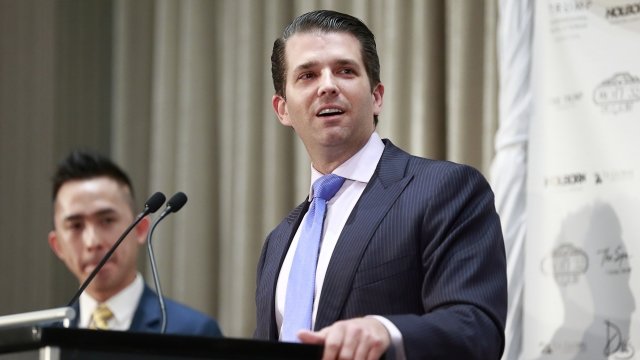 The Russian government might have had something to do with a meeting last year between Donald Trump Jr. and a lawyer with reported ties to the Kremlin.

That's according to The New York Times, which first broke the story about Trump Jr. being promised information that could potentially hurt Hillary Clinton during the 2016 election.

Three anonymous sources now tell the Times that prior to the June 2016 meeting, Trump Jr. received an email saying the compromising material was a way for the Russian government to help the Trump campaign.

President Donald Trump's eldest son said over the weekend the lawyer's "claims of potentially helpful information" were just a way to secure a meeting. He said the topic of conversation was mostly about Russian adoptions.

The lawyer Trump Jr. met with told NBC the point of the meeting was to discuss an adoption program and that she never had any information on Clinton. She also denied being involved with the Kremlin.

Trump Jr. tweeted Monday that he's willing to speak to the Senate intelligence committee, which wants details about the meeting.

Members of the House intelligence committee also want to question Trump Jr. for their investigation into Russian meddling in the election.

The FBI has been investigating links between President Trump's campaign team and Russia for months. And Trump Jr. has now hired a criminal defense attorney.