A Hand Up: From Street Living to StreetWise 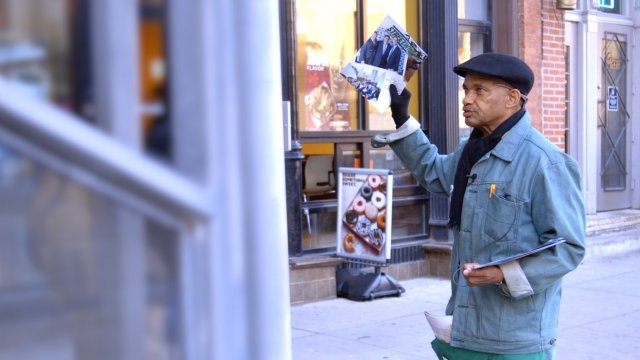 An intimate portrait of a Chicago street paper organization that gives homeless people a sense of dignity and an opportunity to make an honest living.

In this short film, viewers meet a man who went from homeless to housed and from drug addict to business hopeful. He's a vendor for StreetWise, a street paper distributor in Chicago.

"We have a hand up holding the magazine, and we don't have just a handout," said A. Allen. He's one of StreetWise's success stories.

"There are street papers around the world that give the papers away to vendors for free," said Julie Youngquist, CEO of StreetWise, which was founded in Chicago in 1992.

"But the thinking around the StreetWise model — to have the vendors buy the magazine and then sell them for a profit — goes back to our mission to give people a hand up, not a handout, and to empower them to work," Youngquist said. "They have to invest in themselves, invest in their business, and it is more of an entrepreneurial approach to helping people move out of the immediate crisis of poverty."

Unlike other traditional print publications, StreetWise's business model doesn't entirely rely on magazine sales and advertisements. Slightly more than two-thirds of the weekly magazine's revenue comes from private donors' contributions and fundraising events. The last third comes from the sales of about 265,000 magazines a year by the organization's 150 vendors.

Still, the decline of print media and our increasingly cashless economy are serious challenges to the vitality of street papers around the world.

"We are helping vendors set up bank accounts and getting smartphones so they're able to accept digital forms of payment," Youngquist said. "And for our vendors who are able to do that, their sales have actually increased, which is great."

"The print piece is an interesting challenge," Youngquist said. "There's a debate: Do people buy the magazine because of what's on the cover and what might be inside the magazine? Or do they buy it because they're supporting the vendor? And we've done reader surveys probably every two years for the last 10 years and I will tell you it's both."

"So we're fortunate in that way, that we're not a typical, traditional print publication like newspapers and other magazines," Youngquist said. "We have this human connection to the purchase of the magazine that provides a little bit more than just what's in the magazine."

"When vendors are here, they're not homeless, they're not judged," Youngquist added. "They're just friends and brothers and mentors and leaders, and they're amazing. It's the most amazing group of people I've ever met."