A Safer, Cheaper, More Sustainable Way To Rebuild After Disaster 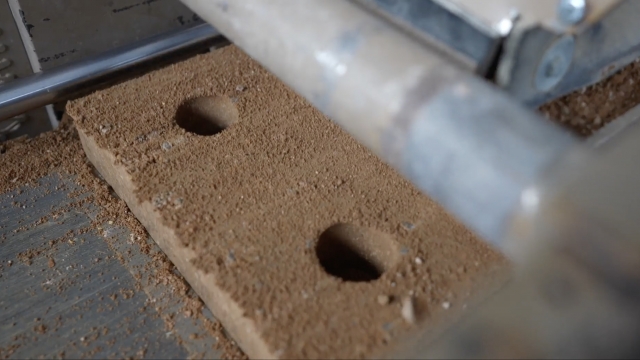 A company turning dirt into building material could help rebuild neighborhoods that have been hit by fires, tornadoes, floods and more.

Matteo Rebeschini and Melanie Glover lost their home to a fire.

"You could hear the fury of the wind and within not even minutes, we saw live flames outside of the house, and then we saw the deck of our next-door neighbors on fire," Rebeschini said.

Glover was out for the day. She was on the phone with her family as the fire approached.

"All I could hear was screaming, screaming from my children," Glover said.

It's been about a year since that tragic day. Over the course of 12 months, they've had time to decide what's next.

"Wanting to live in that neighborhood again meant having to build a safer home," Glover said.

That's how they found Lisa Morey. She is the founder of Colorado Earth, a company that creates compressed earth blocks that are essentially made of dirt.

"It's the ground right below our feet often, that we can use to really protect us better," Morey said.

Ryan Runge is behind the machine that takes the dirt and turns it into building material. He is the president of Advanced Earthen Construction Technologies.

"It makes 480 blocks an hour, one every six-and-a-half, seven seconds or so," Runge said. "These machines are what builders will use when this industry really takes off."

This concept of using this material to build is far from new.

"It's been something we've been doing for thousands of years throughout the world," Morey said. "It's even estimated that around 40% of the world's population still lives and builds with this material."

They say they have the technology to make it widespread in the United States, but it has yet to be adopted in the mainstream.

"The way we build houses today was meant to be a temporary solution after WWII with a quick need for housing, someone figured out you could throw some cheap wood up and build houses real fast and for some unfortunate reason it stuck," Runge said.

He points to the long list of benefits that would come with building companies adopting this model.

"It's disaster proof. It can't burn, tornadoes can't blow it again, when stabilized it's waterproof so it's actually flood-resistant. It's hard to imagine a natural disaster that would ruin this wall," Runge said.

It's much more environmentally sustainable with an impressive low carbon footprint and price. That's what Rebeschini and Glover desperately want more people to be aware of.

"We know there is a better way to build and we know it doesn't have to be more expensive, it's just a different way of doing it," Rebeschini said. "We want to lead by example to show this is possible."

"It could potentially be very, very inexpensive," Runge said.

That's if the construction industry shifts to using these materials, while putting the infrastructure in place and building up the supply chain.

"It's made locally, it can be made from local material in any town in this country. There could be an earth block machine in every major city if not every town," Runge said.

Between climate change, inevitable natural disasters and a rough economy, it's a push to build a new reality of what we all call home.

A year after an EF4 tornado ripped through, the town of Mayfield is still trying to recover.