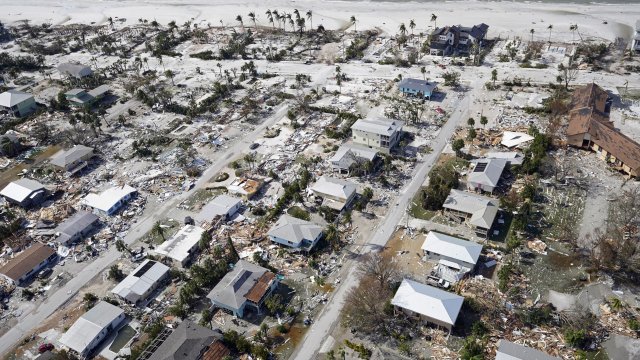 More than 3 million Americans lost their homes to natural disasters in 2022, according to the U.S. Census Bureau's Household Pulse Survey.

Almost a third of those homes were in Florida where many are just beginning to rebuild after Hurricane Ian.

While it may be cliché to say recovery doesn’t happen overnight, in places like Southwest Louisiana, where many people still aren't in their homes after two hurricanes hit the area in 2020, the current state of the economy is making the road back even longer.

Blue tarps still cover numerous homes in Lake Charles, Louisiana. The area was hit by Category 4 Hurricane Laura and Hurricane Delta within months of each other.

“I pretty much break down almost every day and, it just, you have to keep going you can’t stop," said Brandy Wren.

She and her family of four have lived in a trailer on their property ever since Laura destroyed their home. Wren said she purchased the trailer with $20,000 that she received from FEMA after the storm.

However, money to replace nearly everything doesn’t go far with inflation driving up prices.

“It hits you that everything you work for is just all gone. All for nothing," Wren said.

The Fuller Center for Housing, a nonprofit organization, and its volunteers are in the process of building Wren a new house in the place where her home used to stand, at no cost to her.

The Fuller Center is part of a group of nonprofits working on getting hurricane survivors back into their homes.

"The longer the house stays sitting, the worse the damage gets," said Greta Willis with the Fuller Center.

Building a new house used to take about four months, according to Willis. Now, she said, it can take twice as long.

"The windows can be up to 12 weeks delivery times, trusses for the roofs can be anywhere between six and 12 and 13 weeks for them to get to us to build," Willis said.

A Safer, Cheaper, More Sustainable Way To Rebuild After Disaster

A company turning dirt into building material could help rebuild neighborhoods that have been hit by fires, tornadoes, floods and more.

The Fuller Center relies on volunteers, like church groups to help build homes, some traveling from as far away as Pennsylvania to lend a hand.

The same supply chain issues that have delayed home builders nationwide in the pandemic are not just an inconvenience when you’re trying to get hurricane survivors into homes.

"We're stopped for 12 weeks before we can do much else and that’s a killer," Willis said when describing the delays.

One issue continues to be the cost of materials which is 45% higher today compared to April 2020, according to The National Association of Home Builders, citing the Producer Price Index through the Bureau of Labor Statistics.

Economic challenges aren't just leaving their mark in Louisiana but in places where recovery is still in the beginning, like Southwest Florida where Hurricane Ian destroyed more than five thousand homes in 2022.

Florida is putting $25 million into buying materials for nonprofits that are rebuilding homes there.

Willis doesn't know when Lake Charles and Southwest Louisiana will be whole again after the two storms of 2020, but in the case of Wren, who will hopefully be in her new home in the spring, just the thought of having a house again is enough to make her emotional.

"Knowing my kids will have something back that they lost, you know, I mean my kids have been wonderful not once complained about how they lost everything, and how they didn’t have anything, and to be able to give them their home back it just means a lot," Wren said.