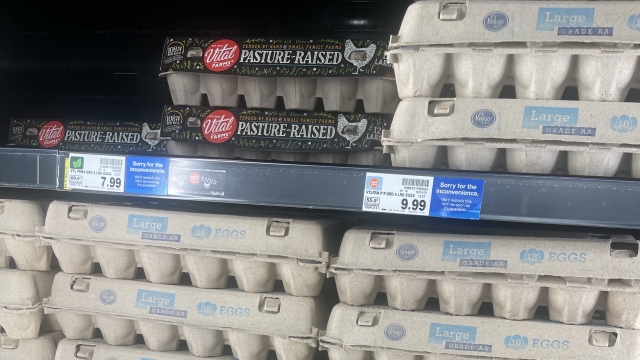 Eggs have always been a staple ingredient in the kitchen and in the grocery cart, but consumers say there's nothing sunny about the staggering prices at the supermarket.

"When I'm going to the store with my wife, it is really fluctuating, going up a lot," said Greg Price, community development director of Inverness, Florida.

The cost of eggs is cracking wallets open from coast to coast and directly impacting business owners.

Paul Cisek co-owns a market in Tucson, Arizona. He says he's been forced to purchase eggs from Costco just to keep them on the shelf, and it's cutting into his profits.

In Colorado, restaurant owners say they're being forced to pass the cost off to consumers.

"Just across the board 10% — eggs have gone up a lot more than that, but we're just hoping to slow the leak, you know, the bleeding down," said Vicki and Rob Fraley, restaurant owners in Colorado.

Avian flu, also known as bird flu, combined with a spike in feed prices, fuel and labor costs, all drove up egg prices.

It's not just eggs; other foods are up sharply in price

Inflation may be easing, but not at the grocery store.

Data shows the national average for a dozen eggs in November hit $3.59 — more than double from $1.72 a year earlier.

In some places in Phoenix, those prices nearly tripled. Some stores even put a limit on eggs per person, while others had empty shelves.

Elliot Rabinovich, an Arizona State University professor in supply chain management, says a new Arizona regulation this year requiring hens to have more space is also driving up prices in the sunny state.

"As a result [it] had an impact on the amount of supply of eggs that farms were able to produce," Rabinovich said.

In a statement to Scripps News, Kroger described the egg supply as "adequate," but added that retailers nationwide have been experiencing egg shortages since last March due to avian flu. And Walmart acknowledged a tightness in product, adding that they are seeing an improvement in supply.

Of the 58 million birds slaughtered in the past year to control the virus, 43 million were egg laying chickens. Those who turned to raising chickens of their own say they're struggling too.

"Because we're having much shorter days, they're not laying as much, so I actually bought a carton of eggs for the first time last week. It was like $10," said Dori Brown, an Arizona resident.

Shoppers aren't the only ones hurting by the high prices. Rabinovich says egg farmers aren't making a fortune in all of this and that some small farms may even go out of business due to the bird flu.

He also said the disruption could last for six months, but it may not stabilize again until later this year.

These Apps Will Help You Save Money On Groceries

You can’t stop food shopping, and you can only cut so many corners while keeping your family healthy. Here are some apps to save on groceries.