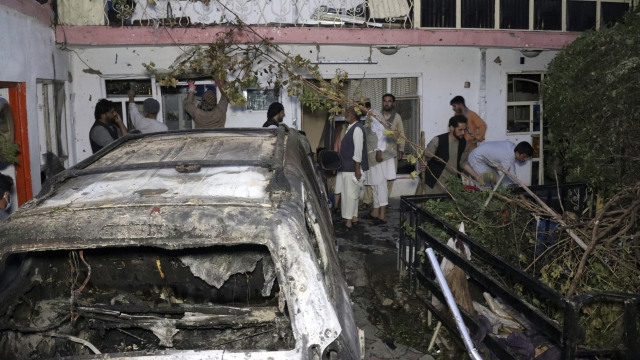 The family says the strike killed 10 relatives, including six children.

Victims of a U.S. drone strike on Thursday have called for an apology after ten people from their family were killed.

Ramal Ahmadi lives in one compound with his three brothers and their families. He said his ten family members were "martyred" by the drone attack which took the lives of six children.

After U.S. Withdrawal, Afghan Allies Are Left Behind

The Pentagon says the strike hit its target and secondary explosions may have killed the Ahmadi family.

Inside the courtyard, barely large enough to accommodate two vehicles, Emal, another Ahmadi brother, says the devastated hulk of a Toyota Corolla, which U.S. intelligence targeted as laden with explosives and readied for a suicide mission, was carrying three children and his nephew.

Emal, who also has a special immigration visa processing, said he wants the U.S. to prove its case against the Ahmadi family, or "accept and apologize" that it was wrong.

Emal also challenged U.S. claims that the vehicle was carrying explosives and that there were multiple secondary explosions, as gas canisters were intact in the corner of the courtyard and the house was relatively unscathed.

His eldest brother, Zamarai, who died along with a nephew, 30-year-old Nasir Haideri, had both worked for U.S. government allied firms and both had applied for Special Immigration visas.

They were being processed at the time of the strike.