Attorney General Sessions To Step Away From Trump-Russia Investigation 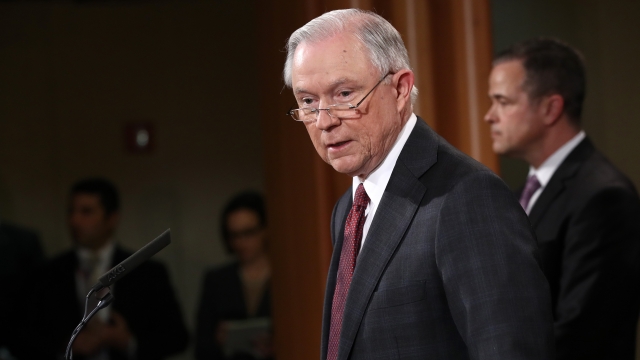 Jeff Sessions won't head the investigation into Trump's ties with Russia because he was part of Trump's campaign.

After the bombshell report that he met with Russian officials during the presidential campaign, Attorney General Jeff Sessions is recusing himself from the investigation into Russia's alleged election interference.

"I have now decided to recuse myself from any existing or future investigations of any matter relating in any way to the campaigns for president of the United States," Sessions said.

At a news conference, Sessions said he had already met with his staff and decided to remove himself from investigating the campaign before the story came out.

The House Probe Into Trump And Russia Is Already Splintering

But news of the talks put Sessions under intense pressure from Congress to back away from the probe.

House Minority Leader Nancy Pelosi said, "This administration clearly cannot be trusted to investigate itself." She and Sen. Chuck Schumer said a recusal isn't enough and Sessions should resign from his position.

And some Republicans, like House Oversight Committee Chairman Jason Chaffetz, urged Sessions to turn the probe over to someone else.

Other leading Republicans, like Sen. Marco Rubio, Rep. Kevin McCarthy and Sen. Lindsey Graham, said they needed more information about what happened before making a decision.

President Trump had no reservations about his attorney general. When asked if he still had confidence in Sessions, Trump replied, "Total."