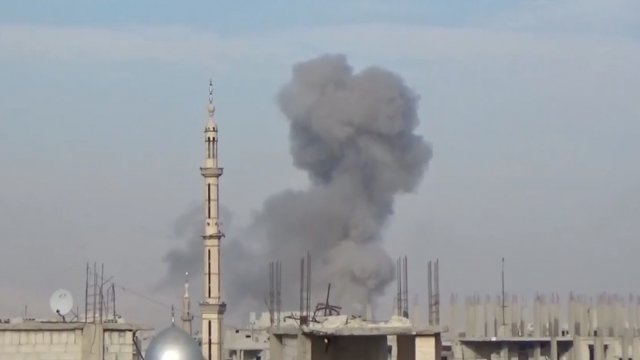 Eastern Ghouta is one of the last rebel-held areas in Syria, and it's been under near-constant bombardment since 2012.

A human rights group says almost 200 civilians have been killed in Syria'a Eastern Ghouta — a suburb of Damascus — after the Assad regime escalated airstrikes there.

The Syrian Observatory for Human Rights says the death toll includes 52 children. More than 1,200 people have been injured.

Eastern Ghouta is not unfamiliar with airstrikes like this. It's been under near-constant bombardment since about 2012. But this is the worst it's gotten there since a 2013 attack that killed about 1,400 people, according to activists. The U.N. says a chemical weapon was used in that attack, which several western governments have since linked to the Assad regime.

Several rebel groups lay claim to Eastern Ghouta. It's one of the last rebel-controlled areas in the country.

Medical supplies are already running low, and now doctors are reportedly struggling to treat all of the injured. One doctor told CNN, "These are the worst days of our lives in Ghouta."