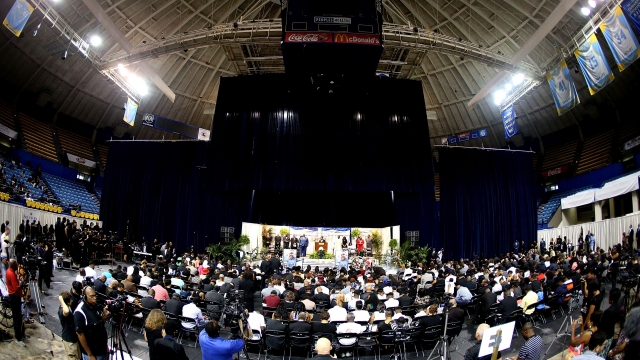 The service was attended by a handful of public figures, including civil rights icons Rev. Jesse Jackson and Rev. Al Sharpton.

The service was attended by a handful of public figures, including civil rights icons Rev. Jesse Jackson and Rev. Al Sharpton. Two representatives from the Obama administration were also in attendance.

Earlier this week, Obama addressed Sterling's officer-involved shooting death during a memorial for the officers killed in Dallas.

"When we hear a friend describe him by saying that when he cooked, he cooked enough for everybody, that should sound familiar to us, that maybe he wasn't so different from us, so that we can, yes, insist that his life matters," Obama said Tuesday.

And Thursday, Obama responded to Sterling's son directly during an ABC town hall.

"I ask for your help to unite the races of this world," Cameron Sterling said.

The president replied, "The thing you expressed, Cameron, is what I meant when I said the country's not as divided as it seems."