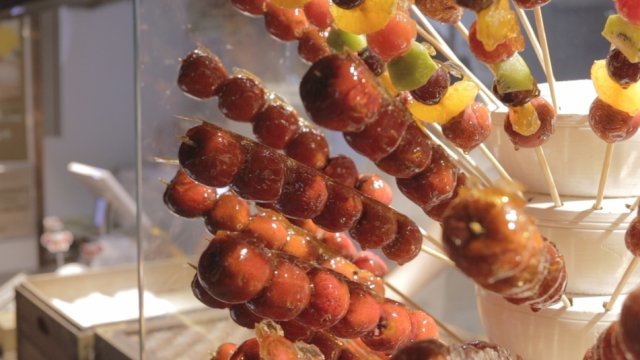 Bullfrog, crawfish, pig brain, cicadas. If you think you know Chinese food, you might be surprised by what fills Chinese plates.

My mouth is completely on fire. It feels like someone's holding a torch in my mouth.

"This is the mild kind," barbs Tianran He, who sits opposite me. He is a Chinese-British travel presenter and an expert on Chinese culture. He's brought me here, to a popular restaurant in Beijing, to experience the core of real Chinese food: spice.

"Everyone in China eats spicy stuff," He says.

While I'm admittedly a wuss with spicy food, this is hardly what I expected from an introduction to true Chinese cuisine, and it has me thinking: What do Americans know about Chinese food? Not takeout. Not Kung Pao chicken. Real Chinese food.

The dishes on a Chinese menu are likely alien to most Americans: spicy bullfrog, spicy crawfish, pig brain, octopus, cicadas. Basically: not General Tso's anything.

"For Chinese people, if you don't have fiddly food it's kind of not worth it," He says, twisting the head off a cooked crawfish. "People eat this thing, not because they want large amounts of meat, but they wanted to eat the flavor of the sauce. They think — a lot of Chinese people think steaks are boring, it's just a big slab of meat."

"All sorts of stuff on skewers," He says. He's in the midst of a kind of delicate dance, weaving his way through a crowded alley in Beijing's Houhai district. This place has a rubbery stench, something you'd expect from an escargot stand. But you won't find snails here. You will, however, find scorpions and grasshoppers.

China's Culture Is Perfectly Encapsulated In This Park

Every morning, Ditan Park in Beijing transforms into a microcosm of Chinese culture.

Houhai is nightsnack central. It's a colorful reflection of Chinese nightlife, which largely revolves around food. It's a massive maze of small footpaths, all lined in shops, restaurants, bars, food stands, and booths offering light-up knick knacks that keep the throngs of people looking like the Las Vegas strip.

And, yes, there's a lot of drinking happening here.

"Drinking culture's a bit different in China," He says. "You go to one of the rooftop bars and you get a crate of beer. And instead of sipping the beer, you down it because that proves how manly you are."

That's where nightsnack comes in — something to soak up all the alcohol.

He slips into a quiet restaurant, several hundred yards off the main drag of Houhai, and orders us some drinks and nightsnack.

"We'll get some Baijiu," He says, carefully selecting a variety of the sorghum liquor. This is not for casual drinkers. With alcohol content ranging from 40 to 70 percent, this stuff is serious.

"But that's a process, right?" I respond. "I mean, you spend a night drinking through that."

He downs a glass of Baijiu in about six gulps, though claiming he could do it in one if he wanted.

"I have to get up tomorrow," he quips with a smile.

He's ordered us lamb offal soup: intestine, stomach, liver, kidney. It's stewing in a mouthwatering broth with onions, chili and other spices.

As we sit over our soup, meat skewers, greens, and Baijiu (served in "oversized shot glasses," according to He, vats, according to me), He launches into a lesson on drinking etiquette.

"Say if I'm hosting you and you're cheersing me, then my cup would be higher than your cup," He says, demonstrating with our glasses. "But if you're the host and I'm trying to curry favor with you, I'll go lower."

It's a finesse that's indicative of how seriously Chinese people take their food and drink. Eating isn't just a necessity of survival in China, it's an artful experience. It's diverse, it's particular, it's creative.