American Journalist Freed After Being Jailed In Myanmar 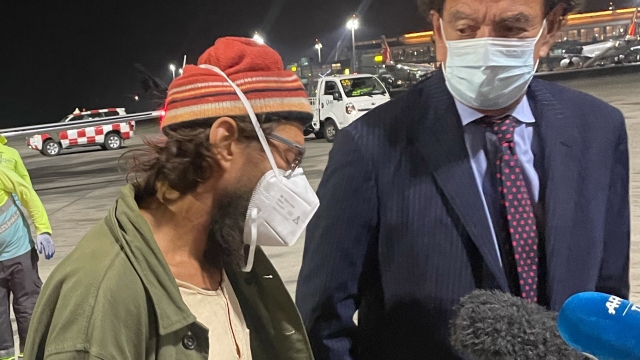 Danny Fenster was released after being sentenced to 11 years hard labor for allegedly spreading false information and violating visa regulations.

American journalist Danny Fenster, who spent nearly six months in jail in military-ruled Myanmar and was sentenced last week to 11 years of hard labor, was freed Monday and began his journey home. Fenster was handed over to former US diplomat Bill Richardson, who helped negotiate the release.

"I'm feeling all right physically," a bearded Fenster, in baggy drawstring pants and a knit hat, said on the tarmac.

"It's just the same privations and things that come with any form of incarceration. You just go a little stir-crazy", he said.

While still jailed, Fenster told his lawyer that he believed he had COVID-19, though prison authorities denied that.

Days before his conviction, he learned he had been charged with additional violations of terrorism and treason statutes that put him at risk of an even longer sentence of life in prison.

He is one of more than 100 journalists, media officials or publishers who have been detained since the military ousted the elected government of Nobel laureate Aung San Suu Kyi in February, and his was the harshest sentence yet.

The exact allegations against Fenster were never clear, but much of the prosecution's case appeared to hinge on proving that he was employed by another online news site that was ordered closed this year during a crackdown on the media following the military's seizure of power. Fenster used to work for the site but left that job last year.

Fenster, a native of the Detroit area, has a master’s degree in creative writing from Wayne State University, and had worked for a newspaper in Louisiana before moving to Southeast Asia, according to Deadline Detroit, a news website to which he was an occasional contributor.

Richardson said he discussed Fenster’s release during a recent visit to Myanmar when he held face-to-face negotiations with Senior Gen. Min Aung Hlaing, the country's ruler.

Richardson is known for traveling to nations with which Washington has poor, if any, relations - such as North Korea - to obtain the freedom of detained Americans.