Thousands Flock To Spain To Pelt Each Other With Tomatoes 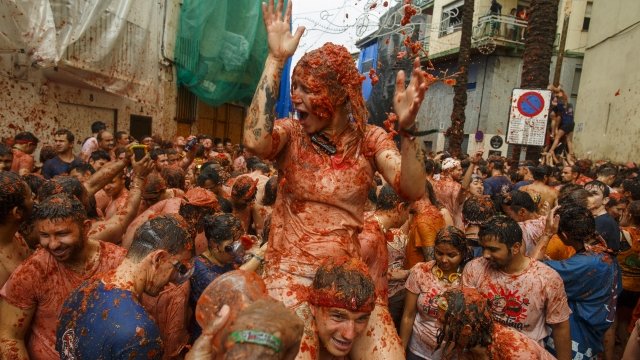 Thousands of people packed the streets of Buñol, Spain, for "La Tomatina," a tomato-throwing festival.

Thousands of people packed the streets of a town in Spain on Wednesday for a massive tomato food fight. Yes, really.

It's called "La Tomatina." Every August, the town of Buñol hosts the tomato-throwing festival.

This year's event brought more than 22,000 partygoers to the city near the eastern coast of Spain. And, by the time the hourlong tomato battle was over, more than 150 tons of red mush covered the people, roads, sidewalks and buildings.

La Tomatina dates back to the 1940s, when people started hitting each other with tomatoes during a parade.

You Don't Even Know What Tomatoes Are Supposed To Taste Like

Growers would rather their tomatoes be durable than flavorful. But we might be able to bring some of those flavors back.

Several other places have tried to copy the tradition — including Colombia, Costa Rica and even the U.S.

Security at this year's festival was increased after terrorist attacks in and around Barcelona earlier this month.

Around 700 agents were on duty during the festivities. But at least two Tomatina-goers told Reuters they weren't worried and felt safe during the event.