Apparently, It Really 'Tis The Season To Get Engaged 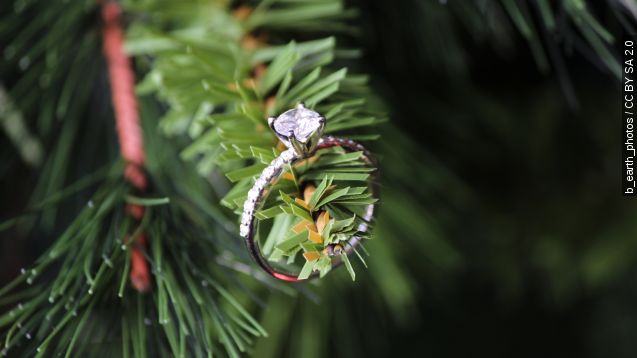 You're not imagining it. Everyone gets engaged during the holidays.

You know that feeling when you're really excited about getting a new robe on Christmas morning only to see on Instagram a few hours later that your friend from second grade is now someone's fiance? You're not alone.

The season of love is in full swing around the holidays, and that means a lot of people you know are barreling full steam ahead into adulthood by getting engaged. (Video via Robbins Bros.)

Blame it on too much family time or too much eggnog; whatever the case, it turns out your older brother who thought he was clever by gifting his girl a diamond ring on the Christmas tree is in good company.

WeddingWire reports a third of engagements happen between Thanksgiving and New Year's Day.

A U.K. survey found that 31 percent of people said Christmas Eve was the best day to pop the question. Seven percent chose Christmas, and 18 percent said New Years Eve was the right day to get down on one knee.

This, my friend, is a jeweler's dream. The National Retail Federation reports 26 percent of annual sales at jewelry stores last year were during the holidays. (Video via Zales)

And those diamonds don't come cheap. A survey from website The Knot said the average spent on engagement rings last year was $5,855. We're thinking a lot of Christmas bonuses go straight to the ring fund.

But for the rest of you out there who've found that special someone and haven't popped the question yet, here's to a whole new year of saving!

Matchmaking Is Making A Resurgence In The Dating World

In this segment of "Love Life," Newsy's "In The Loop" explores the resurgence of matchmaking to find love in today's culture.