The Artist Behind Obama's Plant-Filled Portrait 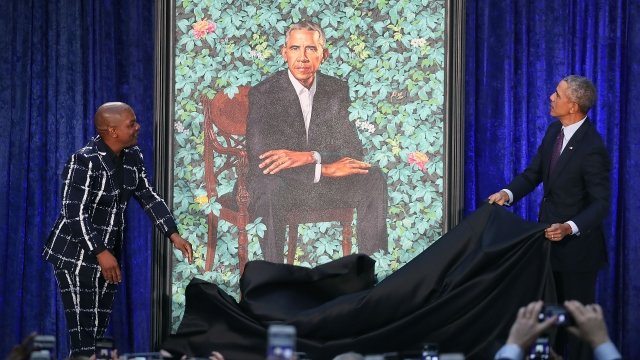 This is former President Barack Obama's official portrait for the Smithsonian National Portrait Gallery. And this is the painter behind the piece: Kehinde Wiley.

Wiley's style is self-described as a modern take on classic European paintings — often using black subjects. It's an intentional way to "interrupt tropes of portrait painting."

But what really stands out in Obama's portrait is the use of plants. That's a theme Wiley has explored plenty. Take a look into his studio from 2014 with Spike Lee amid a collection of trees.

Some say Wiley's floral backgrounds are meant to upend expectations of subjects and dismantle stereotypes of black men.

Wiley notes the flowers included in Obama's portrait are purposeful. They include the official flower of Chicago, and flowers native to Kenya and Hawaii.