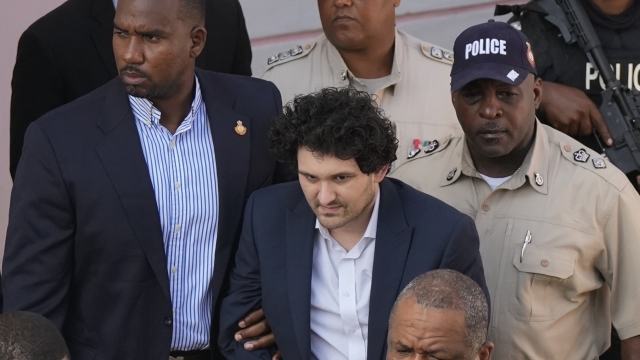 Before his downfall as the founder of cryptocurrency exchange FTX, Sam Bankman-Fried said his generous political donations were not meant to curry favor with lawmakers working on reining in the industry.

"Many of these people, I have no idea what their position is on crypto," Bankman-Fried said in a September interview on NBC’s "Meet the Press."

But a Newsy investigation of Bankman-Fried's massive political financial contributions found he targeted donations to lawmakers working on tighter policies for online currency.

Many of his donations went to members of the U.S. House and Senate who sit on the congressional committees considering the Digital Commodities Consumer Protection Act, a bill supporters say would "create transparency and accountability in the digital commodity marketplace."

The bill has not been scheduled for a vote in the House or Senate.

All of Bankman-Fried's individual donations in 2022 to sitting U.S. senators went to members of the Senate Agriculture Committee, tasked with crafting the bill.

About half of his donations to House members went to representatives on the committee considering the same legislation in that chamber.

Bankman-Fried spent nearly $40 million in political donations in 2022, according to records Newsy reviewed at the Federal Election Commission.

Recipients of his generosity now find themselves with potentially tainted money in their campaign accounts that could be a conflict of interest, especially for those working on stricter crypto regulations.

"The people that have returned it have made a good point about basically trying to wash their hands of this connection between them and Sam Bankman-Fried," said Taylor Giorno, who has been tracking Bankman-Fried's donations at Open Secrets, a nonprofit organization in Washington, D.C.

All eight senators now say they will donate their contributions to various charities.

Bankman-Fried was arrested Monday in the Bahamas, where he has been living, after the U.S. filed criminal charges.

Lawmakers who have said they will not keep those contributions include Democratic Reps. Salud Carbajal of California, Jim Costa of California, Angie Craig of Minnesota, Josh Harder of California, Jimmy Panetta of California and Rep. Glenn Thompson of Pennsylvania, the top Republican on the committee. Other members of the committee declined multiple requests to answer what they plan to do with their campaign checks. Newsy did not receive responses from Democratic Reps. Cindy Axne of Iowa, Shontel Brown of Ohio, Lou Correa of California, Sean Patrick Maloney of New York and Tom O’Halleran of Arizona. When interviewed by Newsy on Capitol Hill, Democratic Rep. Sanford Bishop of Georgia said he was still considering what to do with his donations from Bankman-Fried. Bishop received $2,900 for his reelection campaign, and $5,000 for his political action committee.

"We are now looking to see whether or not we can find a nonprofit that we can donate to," Bishop said.

"It’s obvious that the money was questionable given the indictment.” Sending back or giving away donations from Bankman-Fried may not be possible in some cases. Most of the money Bankman-Fried spent in Washington politics went to his own political action committee called Protect Our Future, FEC records show. The PAC gave to groups supporting candidates and left-leaning priorities that may not have much money left over after the midterm election. The Everytown For Gun Safety Victory Fund, for example, received $48,000 worth of in-kind donations in 2022. There is no cash to return, spokesman Max Steele said in an email. FEC records show a $6 million gift went to the House Majority PAC, a committee supporting congressional Democrats. A spokesperson for the committee declined to answer questions about the donation.

"I haven't heard of any major instances in which something like House Majority PAC would give back $6 million," Giorno said. Campaign finance reports also show Bankman-Fried donated $250,000 to the Democratic Congressional Campaign Committee, and $45,000 to the National Republican Congressional Committee.

He once tweeted, "I signed up campaigns to accept crypto and gave some including millions to Senate and House Republicans."

He also tweeted that he supported "constructive candidates across the aisle to prevent pandemics and bring a bipartisan climate to DC."