As Terrorist Threat Grows In West Africa, Expect US Presence To Grow 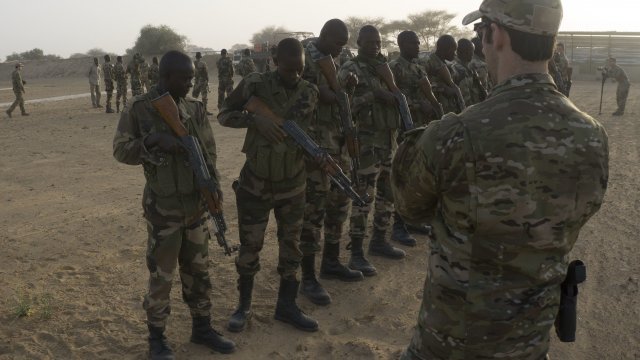 Newsy spoke with CSIS' Africa Program deputy director about extremist groups in West Africa, their future and what that means for the U.S.

After four U.S. Green Berets were killed in Niger, there were a lot of questions from news anchors about why the U.S. was even in Niger and what it was doing.

Niger is in the Sahel — the transitional region between the Sahara Desert and the rest of sub-Saharan Africa. The Sahel, along with West Africa as a whole, is also a major hot spot for terrorism.

"The reason why we're in West Africa is because it's an area of concentration of ISIS and Al-Qaeda," Gen. Joseph Dunford told reporters in October.

The U.S. is in the region because it wants to prevent terrorist groups like Al-Qaeda or Boko Haram from creating safe havens. That translates to advise and assist missions, training exercises and building drone bases.

"The terrorism threat in Africa is evolving; it's evolved over the last 10 years. It will continue to evolve and the trend suggests perhaps expand to other parts of the continent. Therefore, I expect the U.S. presence, the military presence, on the continent to expand as well," Richard Downie told Newsy.

Downie is the deputy director of the Center for Strategic & International Studies' Africa Program. I spoke with him about extremist groups in West Africa and the Sahel, their future and what that means for the U.S. presence there.

"The trajectory is going towards having more of a military presence in Africa. One thing I would say is, partly that's because there's not much of a U.S. presence in other areas of Africa. The current administration has not shown much of a flicker of interest in the African continent," Downie said.

Terrorism in this part of the world isn't a new phenomenon. Al-Qaeda-linked Islamist insurgents took over the Malian city of Timbuktu in 2012 and declared an Islamic State — essentially a precursor to the Islamic State we saw ISIS proclaim in Iraq and Syria.

"A lot of the terrorist groups operating in this region are very opportunistic. Ideology hasn't always been that prominent of a factor in the kinds of operations and activities that they are engaged in," Downie said. "And there's a whole lot of crossover between what you would call terrorism and what you would call basic criminality."

According to Downie, solving the region's terrorism problem is going to take a lot more than bombs and bullets.

"The U.S. does need to invest in its diplomatic assets, its development assets in the region, if it really wants to get a grip on this problem," Downie said.