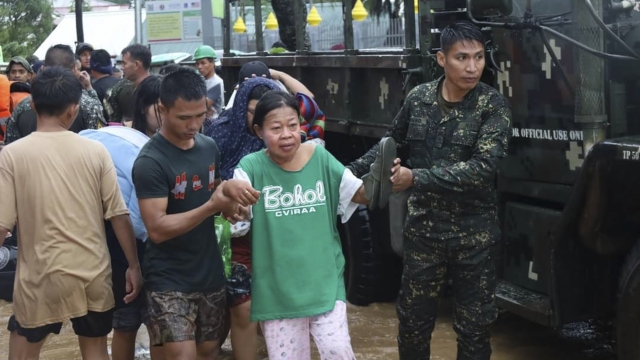 Flash floods and landslides set off by torrential rains swamped a southern Philippine province, killing at least 42 people, leaving 16 others missing and trapping some residents on their roofs, officials said Friday.

Most of the victims were swept away by rampaging floodwaters and drowned or were hit by debris-filled mudslides in three towns in hard-hit Maguindanao province, said Naguib Sinarimbo, the interior minister for a five-province Muslim autonomous region run by former guerrillas.

The unusually intense rains were triggered by Tropical Storm Nalgae, which was expected to slam into the country’s eastern coast from the Pacific Ocean on Saturday, forecasters said.

The stormy weather prompted the coast guard to prohibit sea travel in dangerously rough seas as millions of Filipinos planned to travel over a long weekend to visit the tombs of relatives and for family reunions on All Saints’ Day in the largely Roman Catholic nation.

“The amount of rainwater that came down overnight was unusually (heavy) and flowed down mountainsides and swelled rivers,” Sinarimbo told The Associated Press by telephone.

“I hope the casualty numbers won't rise further but there are still a few communities we haven’t reached,” Sinarimbo said, adding the rains had eased since Friday morning, causing floods to start to recede in several towns.

Sinarimbo said based on reports from mayors, governors and disaster-response officials, 27 died mostly by drowning and landslides in Datu Odin Sinsuat town, 10 in Datu Blah Sinsuat town and five others in Upi town, all in Maguindanao.

Six people were missing in Datu Blah Sinsuat and 10 others in Upi, Sinarimbo said.

A rescue team reported that the bodies of at least 11 villagers were recovered in Kusiong, a tribal village at the foot of a mountain in Datu Odin Sinsuat, where floods and landslides also hit houses in the community, Sinarimbo said.

“They were able to rescue some earlier but now they're only trying to dig up bodies there,” he said, adding it was uncertain how many were missing in Kusiong because of confusion after the tragedy struck the community.

Army officials also reported at least 42 storm deaths in Maguindanao and said in a statement that their forces were “continuing to rescue those trapped in the flood in collaboration with local disaster teams” and take the displaced in army trucks to evacuation camps.

Why Is The Philippines A Natural Disaster Hot Spot?

Super typhoon Haiyan is the fourth typhoon to hit the Philippines in 2013, according to a Weather Underground meteorologist.

The unusually heavy rains flooded several towns in Maguindanao and outlying provinces in a mountainous region with marshy plains. Floodwaters rapidly rose in many low-lying villages, forcing some residents to climb onto their roofs, where they were rescued by army troops, police and volunteers, Sinarimbo said.

Many of the swamped areas had not been flooded for years, including Cotabato city where Sinarimbo said his house was inundated.

“In one area in Upi only the attic of a school can be seen above the floodwater,” disaster-response officer Nasrullah Imam said, referring to a flood-engulfed town in Maguindanao.

The wide rain bands of Nalgae, the 16th storm to hit the Philippine archipelago this year, enabled it to dump rainfall in the country’s south although the storm was blowing farther north, government forecaster Sam Duran said.

Late Friday afternoon, the storm was about 110 miles east of Catarman town in Northern Samar province with sustained winds of up to 53 miles per hour and was moving northwestward.

Earlier This Year: At Least 56 Dead From Philippine Landslides, Floods

At least 28 others remain missing after a tropical depression brought heavy rainfall to the central and southern Philippines.

Dozens of provinces and cities were under storm alerts including the capital, Manila. Fishing and cargo boats and inter-island ferries were barred from venturing out to sea, stranding thousands of passengers, the coast guard said.

About 5,000 people were protectively evacuated away from the path of the storm, which was not expected to strengthen into a typhoon as it approached land, government forecasters and other officials said.

About 20 typhoons and storms batter the Philippine archipelago each year. It is located on the Pacific “Ring of Fire,” a region along most of the Pacific Ocean rim where many volcanic eruptions and earthquakes occur, making the nation one of the world’s most disaster-prone.