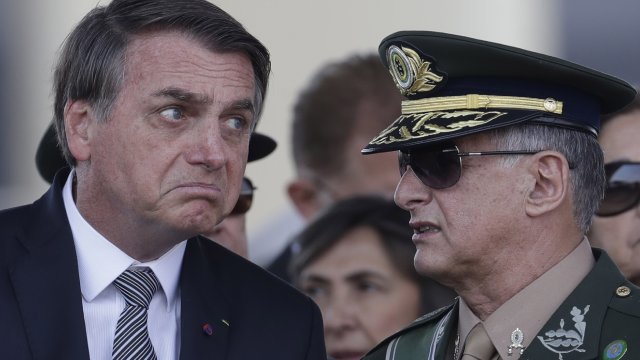 Few in Brazil believe the military would back a coup. Still, the threats bring memories of the military dictatorship, which only ended 35 years ago.

Deaths from COVID-19 each day in Brazil are currently the highest in the world.

And the country's democracy is under serious threat.

"There is this epidemic. There is a terrible social and economic crisis. And the government is going against everything that could help us," said Heloisa Pait, a professor of sociology at São Paulo State University.

Far-right President Jair Bolsonaro is under fire for obstructing governors' responses to the virus and for trying to overstep his authority.

"He goes to these demonstrations without masks and everything. But also, he's doing things that he cannot do as president of the country," Pait explained.

The Brazilian Supreme Court is investigating allegations that Bolsonaro fired a federal police chief to protect his son from corruption charges. Another inquiry is looking into a disinformation campaign that appears to have helped Bolsonaro get elected in 2018.

"It's not a question of finding if there was something wrong or not. I think there was. The question is how we'll do this politically," Pait said.

Bolsonaro could be removed from office by Congress via impeachment or by the courts via an annulment of his election.

"So is it likely? I don't know. I think there's a lot of wishful thinking. If I say 'Yes, it is likely,' it might be because I really want that to happen. I want this nightmare to end," Pait said.

Bolsonaro's government has been beset by crises that his critics say were at least somewhat self-inflicted.

In the meantime, the increasingly embattled president is escalating threats of a military takeover to protect his presidency. Few in Brazil actually believe the military would agree to back Bolsonaro and participate in a coup. Still, the threats have outsized significance in a country that only ended its military dictatorship 35 years ago.

"My personal guess is that the military is just still waiting to see what the Supreme Court and what the Congress decides about the situation," Pait said.

For now, the Supreme Court and other leaders in Brazil are doing their part to keep Bolsonaro in check and fight the virus, which is disproportionately hitting minorities.

"The groups that are more marginalized are really hurting: indigenous people, people in the favelas, informal workers," Pait said.