Brexit Talks Between May And Corbyn Collapse 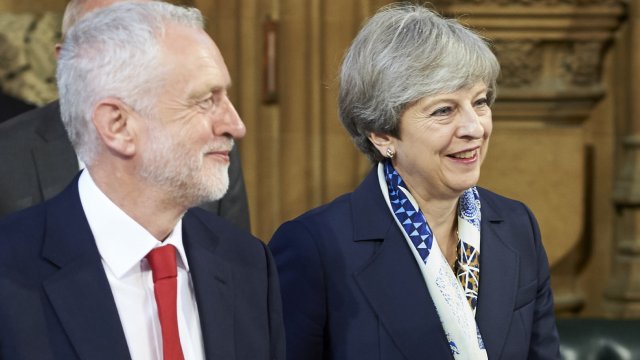 Labour Party leader Jeremy Corbyn said in a letter to Prime Minister Theresa May that negotiations "have now gone as far as they can."

Labour Party leader Jeremy Corbyn said in a letter to Prime Minister Theresa May that their talks to find a compromise agreement for leaving the European Union "have now gone as far as they can." He added the two sides "have been unable to bridge important policy gaps" between them.

The Labour Party and the governing Conservative Party started these negotiations weeks ago in an effort to come up with a divorce deal that would secure a majority in Parliament. But it's not exactly surprising that they couldn't come to an agreement.

The parties are deeply divided over the Brexit issue, and neither leader has much wiggle room when it comes to negotiations.

The failed talks mark yet another defeat for the prime minister. Lawmakers voted down May's Brexit plan a total of three times, and even members of her own party have called on her to resign.

According to reports out Thursday, May promised to step down if her deal is voted down once again when she brings it to the House of Commons next month.