Brittney Griner's Loved Ones Share In Relief Following Her Release 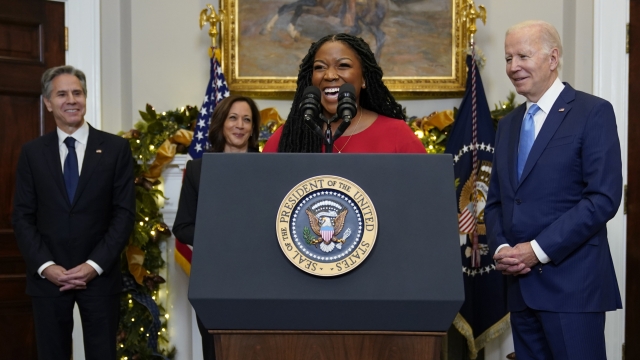 Emotions for Brittney Griner's friends, family and colleagues have been running high since the announcement of her release.

"Today, it's just a happy day for me and my family, so I'm gonna smile right now," said Cherelle Griner, Brittney Griner's wife.

It was a high-profile prisoner swap nearly 10 months in the making. Cherelle Griner joined President Joe Biden in the oval office for the announcement before heading to Texas where she will welcome her wife.

Moments ago I spoke to Brittney Griner.

From a distance, there was an outpouring of support and relief from friends, fans and colleagues.

"My mom was calling me, and she said, 'Britney's out, Britney's out.' I was like, 'What?' And I just couldn't really believe it," said D'Andra Moss, a close friend and former teammate of Brittney Griner. "But I feel relieved that she's going to be back with her family, with Cherelle her wife, and she's on that plane right now. It just makes the holidays even sweeter. "

"This was just really emotional, and I am not hugely emotional," said Cathy Engelbert, WNBA commissioner.

Engelbert says it was a team effort to advocate and negotiate Griner's release.

“There has not been a day over the past 10 months where we all haven’t had Brittney Griner on our minds and in our hearts, and that has now turned into a collective wave of joy and relief knowing that she will soon be reunited with her family, the WNBA player community, and her friends," Engelbert said.

The Phoenix Suns and Griner's team the Phoenix Mercury released a statement, reading in part: "Miraculously, mercifully, the count of days detained has ended at 294, and our friend, our sister is headed back home where she belongs."

Griner was arrested on drug charges at a Russian airport back in February. Russian authorities claimed she had cannabis oil in vape cartridges in her luggage. Griner explained she used marijuana as medicine for pain, but she was still sentenced to nine years in prison — a penal colony designed as a labor camp.

As an openly gay, Black woman in prison in a country hostile to the LGBTQ community, Griner's case carried a sense of urgency.

"She endured mistreatment and a show trial in Russia with characteristic grit and incredible dignity," President Joe Biden said.

Griner's release was part of a prisoner swap for notorious convicted arms dealer Viktor Bout, a Russian felon who illegally sold weapons around the world — sometimes to both sides of conflicts.

"Make no mistake about it, this work is not easy," Pres. Biden said. "Negotiations are always difficult. There are never any guarantees."

Griner's Olympic coach says she feared this day would not come, but her prayers were answered.

"A strong woman, a really strong woman, has the strength of 10 men, and if you think about all the women that had been advocating for BG for nine months now, you add up our strength," said Dawn Staley, head women's basketball coach for the South Carolina Gamecocks. "This movement brought her home."