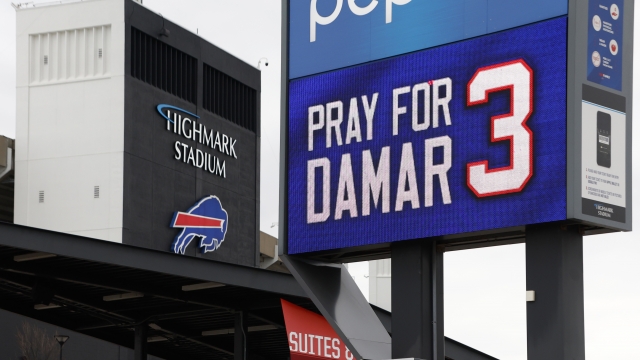 The Buffalo community is coping in the wake of a series of traumatic events — including snowstorm deaths and Damar Hamlin's football injury.

Over the past year the words "Buffalo strong" have taken on various meanings. The city of good neighbors, as it’s known, has been tested over and over. First there was a mass shooting in May of 2022 that took the lives 10 residents, then in late December a historic snowstorm paralyzed the city and killed nearly 40 people. Residents are pulling together in the aftermath.

"You can’t even go to the store in peace. It’s just so crazy," said Yvonne Woodard, a Buffalo resident.

"Everyone’s out. Everyone’s helping. You don’t have to ask," said Joe Stocking, a south Buffalo resident.

Now, the football team that rallied around the community in times of trouble is facing its own heartbreak.

Its star safety Damar Hamlin is seemingly on the road to recovery but remains in the hospital after suffering cardiac arrest during a game.

With the onslaught of tragedy, mental health experts in Buffalo say they are trying to work through the litany of emotions facing the tight knit community.

"We've dealt with a lot in the past two years, but this is like a six month very intense, very impactful trauma. And so collectively, we've been traumatized," Archer said. "Unfortunately, it's like we're become experts on disaster recovery type of efforts. And I don't know that's a good thing or bad thing."

She says the silver lining is a community that always pulls together.

"A young lady took in, there was a gentleman that fell in a snow bank. They took him in. He was kind of confused and he had blisters all on his hand. But they took care of him for a couple of days," Archer said.

And as the community pulls together again, this time for Hamlin, across the country, from Cincinnati to Pittsburgh, a few more neighbors are rallying too.

"He's a strong man, so, he's doing his job, you know — we just gotta do our job and pray for him," said Andrew Irlbacher, a Buffalo Bills fan.

Damar Hamlin's hometown of McKees Rocks, Pennsylvania, is hoping for a speedy recovery after the Buffalo Bills safety collapsed during a game.