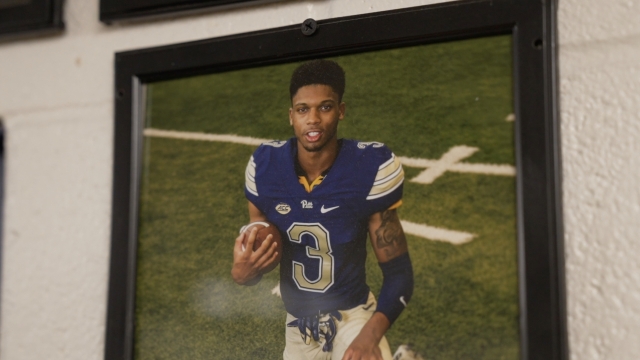 Damar Hamlin's hometown of McKees Rocks, Pennsylvania, is hoping for a speedy recovery after the Buffalo Bills safety collapsed during a game.

It's a small-town feeling just north of the City of Bridges. McKees Rocks is where it all started for Buffalo Bills safety Damar Hamlin.

David Rugh, his youth football coach, knew Hamlin since he was a little kid, first learning how to play football.

For many, these bridges represent lifelines, opportunities for a way out through sports.

"The saying with the kids is, 'one way out.' You know, that's their new motto: One way out," Rugh continued.

Out — but not forgotten.

"Never forget where you come from. And that's one thing about Damar — he has never forgotten about his hometown," Rugh said. "You can get off track very easily. But Damar never got off track. He had goals and he reached every goal he ever wanted to reach."

As Hamlin fights for his life, his community has his back. They're sending hopes and prayers and get well-wishes for a speedy recovery.

Family friends, like Archie Brinza, are praying for the best.

"It's a rough town, but a rough town creates tough people," he said. "It's hard not to love that kid because he's just he got a big heart."

Hamlin went to school at Central Catholic High School in Pittsburgh, where he played football. Terry Totten, who coached him in high school, says Hamlin is a good person, who constantly gave back to his community.

"The steadiness, the calmness, the demeanor. This is a diverse community here at Central Catholic and he embraced that," Totten said.

Hamlin played football there for four years and left his mark before playing college football right next door at the University of Pittsburgh.

Now a pro for the Buffalo Bills in New York, he's never forgotten his roots.

"He had a goal to play in the National Football League, but he had a simultaneous goal, it seems now, to go back to his community and to help out the people that had helped him get through to the height of his game, his sport," Totten continued.

Totten says Hamlin has become a role model for kids and a reminder for them to keep fighting.

What happened on the field Monday shook Hamlin's community.

"I broke down a little bit because it was just like, 'Wow,'" Brinza recalled.

But Brinza knew Hamlin wouldn't go down without a fight.

"I know Damar," hew said. "I know Damar is gonna fight no matter what. So when he was laying there, I knew he was going to fight, but I was worried about his mom and dad."

Brinza says Hamlin's cardiac arrest made "everyone alert that life is short and you never know. And it made us think that stars are made not because of what they do on a football field. This kid was a star before he touched the field."