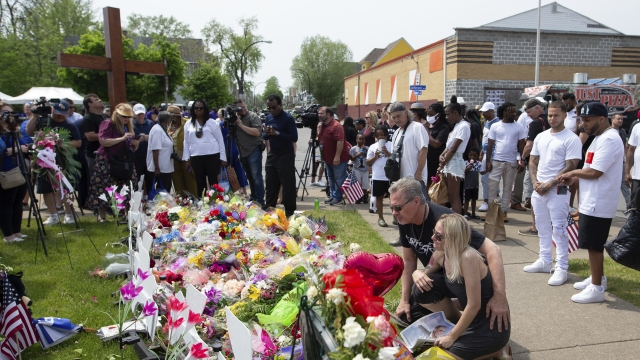 After the funeral, at the Tops store in Buffalo, the mood was a mixture of tension and somber reflection as the city marked one week since the attack.

Roberta Drury, a 32-year-old woman who was the youngest of the 10 Black people killed at a Buffalo supermarket, was remembered at her funeral Saturday for "that smile that could light up a room," as the city marked one week since the shooting with sorrowful moments of silence.

"Robbie," as she was called, grew up in the Syracuse area and moved to Buffalo a decade ago to help tend to her brother in his fight against leukemia. She was shot to death May 14 on a trip to buy groceries at the Tops Friendly Market targeted by the white gunman.

"There are no words to fully express the depth and breadth of this tragedy," Friar Nicholas Spano, parochial vicar of Assumption Church, said during the funeral service in Syracuse, not far from where Drury grew up in Cicero.

"Last Saturday, May 14, our corner of the world was changed forever," he said. "Lives ended. Dreams shattered and our state was plunged into mourning."

Drury's family wrote in her obituary that she "couldn't walk a few steps without meeting a new friend."

After the supermarket shooting, "we are leaning on each other, holding each other, we are trying to stay strong as a community," Brown said.

"Robbie always made a big deal about someone when she saw them, always making sure they felt noticed and loved," her sister, Amanda, told The Associated Press by text before the service.

After the funeral, at the Tops store in Buffalo, the mood was a mixture of tension and somber reflection as the city marked one week since the racist massacre.

At exactly 2:30 p.m., the moment the gunman opened fire, people who gathered and placed flowers near the corner where the victims have been memorialized observed a moment of silence. A dozen workers stood in a line outside of the Tops store entrance. Nearby, some mourners wept.

At the same time, Buffalo Mayor Byron Brown and other elected officials, along with Tops President John Persons, bowed their heads on the steps of City Hall for 123 seconds to mark the span of the attack. Houses of worship throughout the city were encouraged to ring their bells 13 times in honor of the 10 killed and three wounded.

Joshua Kellick, a mental health and substance abuse counselor in Buffalo, said victim Geraldine Talley, 62, was a friend. She worked as a secretary in his office, but she was the glue that held their work family together, he said outside the store.

"She was nothing but loving and giving. She would go out of her way to help everybody. She was a mother, a grandmother to everybody, without actually being just that," said Kellick, who gathered with several of Talley's former coworkers to observe the moment of silence.

Tops Market Survivor: 'We Want To Move Forward In Peace'

Fragrance Harris Stanfield was working at Tops Supermarket alongside her daughter when a gunman opened fire.

Jacob Blake Sr., the father of Jacob Blake, Jr., a Black man paralyzed after being shot several times by police in Kenosha, Wisconsin, in 2020, said he flew into town from the Chicago area to offer support to the victims' families. When his son was shot, Blake said, he needed a true outpouring of support.

"What I needed was somebody just holding my hand," he said. "I just want the families to know that we're here to give them what they need."

As Drury was laid to rest, Spano said mourners would remember her "kindness ... love for family and friends, her perseverance, her tenacity, and most of all, that smile that could light up a room."

She was the second shooting victim to be eulogized.

A private service was held Friday for Heyward Patterson, the beloved deacon at a church near the supermarket. More funerals were scheduled throughout the coming week.

Back at the memorial, Kellick, who is white, said the shooter's motivations and the reality of systemic racism in the country prompted a moment of personal reflection.

"I have to learn a lot of things," he said. "I really need to look at my beliefs. I have a daughter at home. I need to be able to focus on teaching her how to love and care for people, no matter their sex, age, gender, race, sexual orientation."

Cher Desi, a niece of 86-year-old victim Ruth Whitfield, said she would use her own grief to push for change across the nation.

"I don't want anyone leaving here and judging people on their race, on their religion, or where they come from," said Desi, who now lives in Orlando, Florida, but often returned to Buffalo to visit the aunt who raised her. "How many people have to be devastated? The senseless killing has to stop."