LGBTQ Seniors Face Housing Discrimination, But Not In This Building 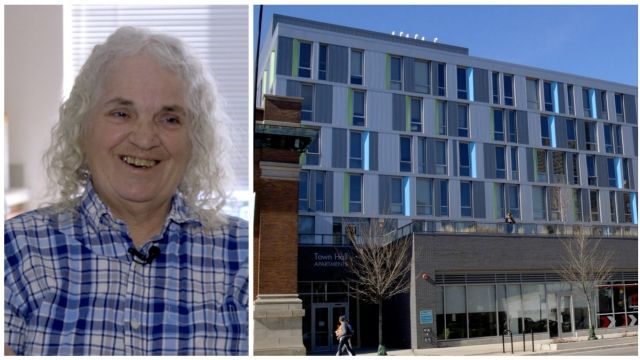 LGBTQ seniors are more likely to be in poverty than heterosexual people, and that can affect their living situation.

"How come all the cool girls are lesbians?" asks Cummings, as she reads a magnet on her refrigerator.

The Navy vet is 63 years young and a neighbor to hundreds in Town Hall Apartments, Chicago's first LGBTQ-friendly affordable housing for seniors.

Town Hall is a modern building in the heart of the city's proudest neighborhood. It provides steady housing to "gayby boomers" — the first generation to step out of the closet and fight for equality. Here, rent is 30 percent of a tenant's income. That's a huge help to Town Hall residents because 63 percent of the building lives below the poverty line.

Cummings said she faced some housing problems in the '70s when she got out of the Navy and that renting a one-bedroom apartment in San Diego was a tall order.

"You can't discriminate because of sexuality for housing or anything else," she says.

She says equality, especially in housing, is really important.

Why Does The Government Care About The Sex Lives Of Blood Donors?

A 21-year-old student filed a federal human rights complaint in Canada to challenge its blood deferral policy for men who have sex with men.

A 2013 report from the Department of Housing and Urban Development found same-sex couples "experience less favorable treatment than heterosexual couples in the online rental housing market." And as of early 2012, only 21 states and the District of Columbia had enacted fair housing legislation prohibiting discrimination based on sexual orientation or gender identity.

So it's a good thing the new head of Housing and Urban Development knows a lot about gay people.

"You think they have control of their sexuality?" CNN's Chris Cuomo asked Ben Carson.

"You think being gay is a choice?"

"Because a lot of people who go into prison, go into prison straight and come out gay. So did something happen while they were in there?"

Carson is a retired neurosurgeon citing a bizarre example and going against the findings of the American Psychological Association, which determined being gay is not a matter of choice.

Jesus Ramirez-Valles, author of "Queer Aging: The Gayby Boomers and a New Frontier for Gerontology," is a professor and director of community health sciences at the University of Illinois at Chicago's School of Public Health.

Ramirez-Valles explored what factors make LGBTQ seniors more likely to live in poverty than straight people and debunked the myth of "gay affluence" that stereotypes LGBTQ people as living a privileged life straight out of the show "Modern Family."

"Baby boomers, many of them make less income, they were fired from their jobs because of discrimination, they lost their job because of HIV," Ramirez-Valles says. "For a variety of reasons, we don't have access to the same material resources available to the larger society. It's a myth that we've debunked with economics, statistics and demographics that show the large majority of LGBTQ people actually are in poverty. "

In 2013, The Williams Institute determined lesbian, gay and bisexual people are more likely to be poor than heterosexual people. Contributing factors include the risk of being homeless when young, being denied the economic benefits of marriage, and discrimination at school and work.

"Let me give you an example," he says. "If the person was infected in the '90s, likely he got AIDS and probably got off the job market — so losing income. Returning to that labor market has been extremely difficult for many people, so they live in poverty."

But some weren't fortunate enough to even stay in poverty. The AIDS epidemic claimed 500,000 lives in the United States by 2002, including Cumming's brother John, who was also gay.

Cummings now lives alone in Chicago, has a pet care business and says her nieces and nephews swing by from time to time. Her newest family may be next door.

"We interact quite a bit," she says. "We interact every day. We do have personality clashes at times, but who doesn't?"

Sounds like family. And it's supposed to. A top problem all aging adults face is isolation — and Town Hall is designed to combat that.

Britta Larson is the Senior Services Director at the Center on Halsted. The center, along with Heartland Alliance, worked together to make the idea of Town Hall Apartments come to fruition.

"LGBTQ adults are more likely to be aging alone," Larson says. "They're less likely to have had children, less likely to be living with another person. They may not have any family. For the most part, the LGBTQ community relies on friends as a social network. As they age, their friends are aging, too. Their friendships, their circles are aging, too. So they're coming to us to increase social networks and help with that."

Larson notices how Town Hall has affected its residents. She said she's seen them transform after benefiting from a lack of discrimination, stabilized rent and the services offered.

"They're living their best life," she says. "They're flourishing under our services at Town Hall, and it's really, really powerful to see."

"The fact that we have Town Hall apartments in such a prominent location with such high visibility is sending the message that older LGBT adults are important," she says. "They need our advocacy. They paved the way for us to be as welcomed and out in a society. I think a lot of young people don't know the history and how far we have come. They could have been fired for being gay. They could have been ostracized from seeing their families or their faith community. They could be put in jail. The fact that Town Hall Apartments is connected to a former police station is really significant. This was not a safe space for LGBT. And now, it's LGBT housing. We've really come full circle."

Town Hall is located near community, medical and senior centers tailored to the LGBTQ community, and there's a need for more housing like this.

Republican Congressman Scott Taylor wants to change that. He is introducing a bill that would amend 1968's Fair Housing Act and make discrimination against LGBTQ renters or buyers illegal nationwide.

And with over 2.7 million people age 50 and over identifying as LGBTQ, more people like Cummings need protection from housing discrimination.

"LGBTQ rights are human rights," Cummings says. "Support human rights. You're adding love into the world, which is what we're missing these days."