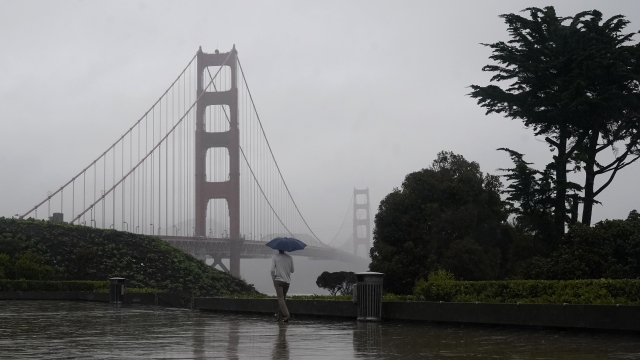 Heavy rain that caused flooding, sinkholes and closed roads is starting back again as crews still try to repair damage from the week's earlier storms.

As crews try to clean up California, the next round of rain is already falling in its northern regions.

At least 18 people are dead from the deluge of storms over the past several weeks. Rock slides and severe flooding shut down some of the state's busiest highways.

"This is the kind of weather that you would get in a year, and we've compressed it just into two weeks. And more significantly, we're looking at more rain over the next week," Kounalakis said.

Tens of thousands of people remained without power, and some schools closed for the day.

After a storm cell dropped a foot and a half of rain in parts of southern California's Ventura County, forecasters think this next system could bring five to 10 inches to parts of northern parts of the state.

Areas in and around Los Angeles will get a bit of a break, expecting only one to three inches from the new storm.

"It's been these cycles over and over again that are really kind wearing on the community," said Jason Hoppin, public information officer for Santa Cruz County. "We are probably a little over half way done at this point, so we are not out of the woods yet. We have another week to go."

The flood waters rushed out of the mountains and into the deserts Wednesday.

President Joe Biden pledged a swift federal response, as cleanup races against the clock of another approaching downpour.

A flood watch was in effect for a large swath of Northern and Central California, with 6 to 12 inches of rain expected through Wednesday.