Threats From Northern California Storm Remain Even As Rain Moves Out 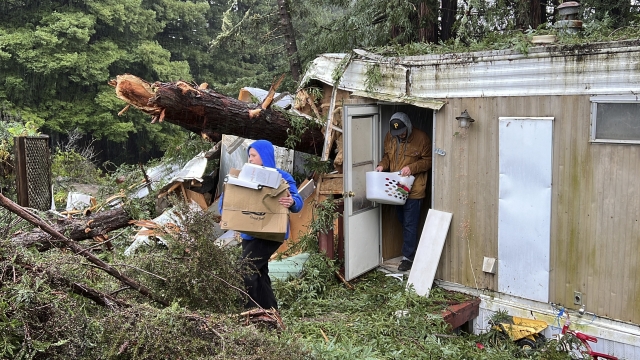 Thousands were without power across northern California, with officials working to restore it amid remaining flood warnings across the coast.

The rain and storm water finally started moving out of California Thursday as flooded roads started to clear, power came back on and repairs begin.

"It's great because we need the rain, but when it comes down so much all at one time, the water has nowhere to go, the ground is already saturated, and it causes this really unsafe environment," said Tyller Williamson, the mayor of Monterey, California.

Pacific Gas and Electric, the main utility company in northern California, said 440,000 customers were in the dark. It worked overtime to restore power to an overwhelming majority of those homes by midday Thursday.

"This storm that began yesterday is one of the strongest that we've had in the system," said Janisse Quiñones, electric operations leader at PG&E. "We were clocking winds of about 100 miles per hour and about 15 inches of rain since the new year's storm started."

The storm is expected to dump up to 6 inches of rain in parts of the San Francisco Bay Area, where most of the region remains under flood warnings.

There have been two deaths linked to the massive storm so far: a 19-year-old who hydroplaned into a utility pole, and a two-year-old boy who was killed when a tree fell into his family's home.

"When I first arrived on scene, a frantic father came out of the house holding the child," said Ronald Lunardi, chief of the Occidental Volunteer Fire Department. "He was kind of covered in debris and said, 'My child is not breathing.'"

In southern California, a deluge of rain flooded roads in a region not used to heavy storms.

Five inches of water fell in parts of Los Angeles — about a third of the city's average annual rainfall in just a couple days. A rockslide near Malibu blocked a highway, and trees came down in west Hollywood.

Officials are warning Californians not to venture out in impacted areas, as the threats remain even as the storm moves on.

"If you have to be out and you encounter a flooded area, please do not drive through it. And please, obviously, if there are any downed power lines, you need to avoid those," said Mary Ellen Carroll, executive director of the San Francisco Department of Emergency Management.