California's Heavy Rain Is Pushing Snowpack Out Of Historic Lows 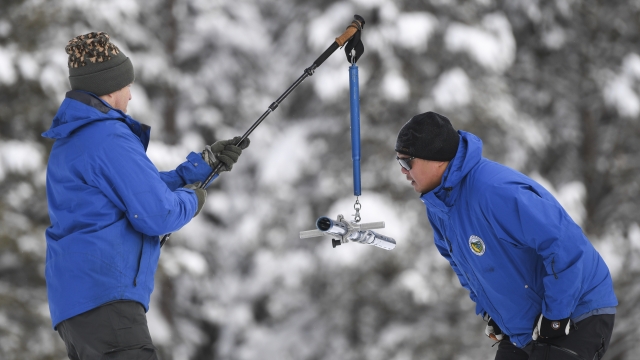 California's snow survey is showing one of its best starts in the last 40 years, which is great news for the West's long-running drought.

Good news for the West came from the California mountains Tuesday: There's been more water in the snow than researchers have seen in years.

"At this point we have over half of an average year's snowpack with roughly three more months to build upon it," said Sean de Guzman, manager of snow surveys and water supply forecasting with the California Department of Water Resources. "Our snowpack is actually off to one of its best starts in the past 40 years."

The first snow survey of the year showed signs the West could be on a tentative first step of many toward crawling its way out a years-long drought. But, it's far from certain.

"That doesn't mean we're out of the woods quite yet, and we must continue to remain vigilant and continue to conserve water," de Guzman said. "No single storm event will end the drought. We'll need consecutive storms, you know, month after month after month of above average rain, snow and runoff to help really refill our reservoirs."

The low snowpack levels could hurt the state's water supply and lengthen the drought.

An unusually wet December flooded communities near Sacramento and water-logged roads across the state.

"We rescued dozens of people over the last 24 hours from the rooftop of their vehicle or from the bed of their pickup truck when it became impossible for them to rescue themselves," said Dan Quiggle, chief of the Cosumnes Fire Department.

It's been dangerous for some Californians but a blessing for the land they live on, as critical reservoirs in the West dry up, hitting historic lows.

"Lake Oroville is currently only at 35% of capacity and Lake Shasta, which is our largest reservoir here in the state, is only at 34% capacity as well," de Guzman said.

Now with a fresh band of storms on the way to the Golden State, researchers are hoping the trend continues, as residents in the path of the wet weather get crucial warnings.

"This appears to be a significant event, not only in terms of rainfall but in terms of wind, which can create downed trees and downed power lines, so be attentive over the next several days," said Karla Nemeth, director of the California Department of Water Resources.

Why Is The U.S. West Experiencing A Megadrought?

Climate change is affecting the U.S. especially strongly in the west. Rivers and reservoirs are experiencing dangerously low levels.