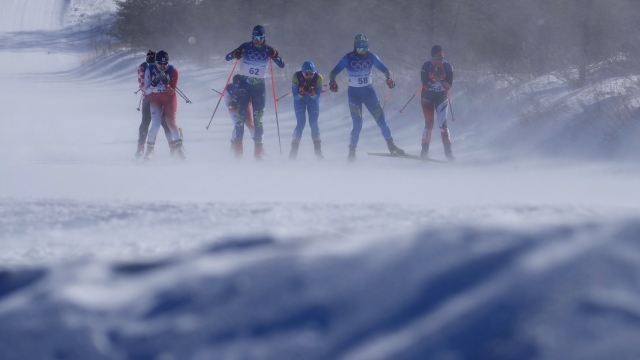 Although it's an Olympics off-year, 2023 was going to be a big planning year for the Winter Games. But there's been a hurdle in the planned announcement of a host for the 2030 Winter Olympics.

The International Olympic Committee indefinitely postponed the selection, originally scheduled for later this year, while it tries to figure out the future of the Games. Hosting a Winter Olympics gets a bit more difficult when there's less snow.

Climate change and sustainability are big parts of the problem. A new study assessing 21 previous host cities of the Winter Olympics and how they'd fare in various emissions scenarios shows the picture gets pretty dire.

"Even under a low-emission scenario, so that's something compatible with the successful Paris Climate Agreement, we're losing almost half of those locations as climate-reliable locations this century," said Daniel Scott, a professor of geography and environmental management at University of Waterloo and lead author of the study. "A number of those places that are sort of lost from that list are places that we consider traditional winter powerhouses in terms of sport. Innsbruck and a lot of them were in the Alps."

In a high-emission scenario, it gets even worse. Only one of those cities — Sapporo, Japan — would have conditions good enough to reliably host snow sports.

And it's not just about having enough snow. The quality also matters, and that can vary based on things like temperature and humidity.

"Fresh snow, I often say it looks like it's the classic piece of paper that you've cut out that has six sides of it," said Steven Fassnacht, professor of snow hydrology at Colorado State University. "Not all of it does. But once that hits the ground, it starts to round the pointy parts. The tips, all the sharp bits, will round off, and it deposits in the hollows. You can still ski on it, but it's not that same experience. It's much denser. It tends to pack a lot better."

Fassnacht has done research on snow and fake snow.

Ski resorts around the world already rely on artificial snow to make sure there's consistently enough on the slopes for people to still ski, and even the Winter Olympics has used it before. The last three Winter Games have used at least 80% artificial snow.

So why can't the Games just make more snow? For starters, the fake snow doesn't feel the same as fresh new snow. The process also requires conditions to be just right, and it's very energy intensive.

"Water is the first part," Fassnacht said. "Second part is ... is a lot of energy required to often pump that water up the hill, and then having that pressure and being able to force that water out of that spigot to create this artificial snow. So that's another big component: There's a lot of power required, a lot of electricity required. If we are in a location where it's humid and not that cold, we can't even make snow because it's too warm."

Although Winter Olympics sites are already using artificial snow, the IOC has said it's aiming to incorporate sustainability into its future hosting criteria. If that happens, there are some alternatives available to make the games less dependent on the fake snow.

"Not all of the Alps locations are vulnerable," Scott said. "There are a couple of higher-elevation places that do OK. And one of the things that we propose as well: Rather than one country, one community, hosting, perhaps you have a regional game. So you might have a Rocky Mountains Games, which could be Denver and Salt Lake City collaborating, or it could be Denver or Salt Lake City or one of those two and say, Calgary in Canada."

Why Do Governments Fund Sports?

Sports have a unique way of bringing us together. They unite. And lawmakers love attaching their name to them.