Carles Puigdemont Turns Himself In To Belgian Authorities 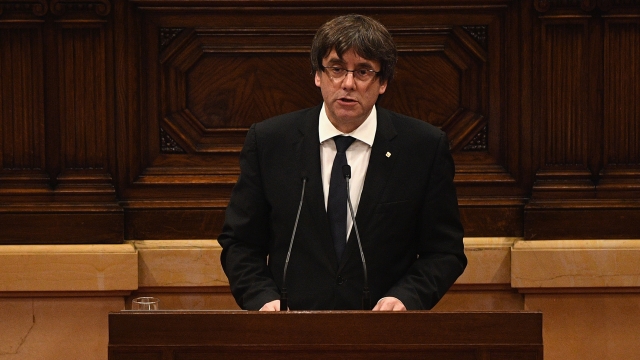 While serving as Catalonia's president back in 2017, Puigdemont organized an independence referendum that Spain deemed illegal. As a result, the country's government dissolved Catalonia's parliament and took direct control of the region. Meanwhile, Puigdemont fled to avoid getting arrested.

Spain's Supreme Court issued the new European arrest warrant after it sentenced 12 of Puigdemont's former colleagues for their roles in staging the 2017 referendum.

Those sentencings triggered massive protests in Barcelona and other parts of Catalonia. Clashes between protesters and police turned violent once again Thursday. And hundreds of thousands of demonstrators left their jobs Friday to participate in a general strike organized by pro-independence unions.

Spain wants Puigdemont on charges of sedition and misuse of public funds. But that could prove problematic in Belgium, since the country's criminal code doesn't contain an equivalent offense for sedition.

Puigdemont was released by a judge Friday, pending an upcoming hearing. His office said in a statement that although he's complying with the warrant, Puigdemont still opposes being extradited to Spain.